Salvete omnes,
I have decided to return to the Kurz' Journal  and this episode the author would tell you about his first bison hunt in the Upper Missouri prairie country.
Kurz arrived at  Fort Berthold on July 8 1851 and was to stay there working as a clerk. Due to a cholera outbreak among the Indians in August,  the manager from Fort Clark Dorson arrived there and ordered Kurz to go across the Missouri River to stay at the second post run there by the American Fur Company - 170 miles as crow flies,  said Kurz. His guide Bellange and he left on  September 1, and arrived on the 6th (or so) at the destination. (some other time I will pull interesting bits and pieces from that journey, as well as about the return to his station or post at Fort Berthold). 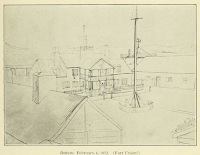 After breakfast old Spagnole [Joe Dolores], our cattle herd (doesn't look like a shepherd) brought news that huntsmen from the opposition fort ['dobies']  were running buffalo on the lower prairie. At once Mr. Denig*, with much kindness, offered me the pacer so that I could chase buffaloes with Owen Mackenzie [half-Indian, half-Scott] and so have an opportunity to study them. 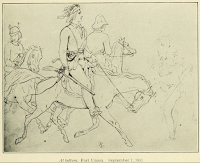 Mackenzie rode Condee. We were therefore admirably mounted, and having no orders to bring meat back we followed the hunt with no other object in view than our own pleasure. Mackenzie was to kill a fine specimen so that I might have the chance to make a sketch. My equipment consisted of my sketchbook, carried in my pouch, which was swung over my shoulder, a rifle laid across my lap, hunting knife stuck in my belt at the back, and a bullet pouch hung beside
the powder horn, also suspended from my belt. Mackenzie had returned only this morning at breakfast from a buffalo hunt of several days in another region; it was therefore most kind of him to ride out again with me before he had taken any rest.

How different are one's sensations when sitting a fiery courser whose desire is always to advance beyond the pace, which one must constantly restrain, lest the animal be carried beyond control from excess of high spirits, from sheer delight in the chase — how  different from riding a weary, melancholy nag that one wears oneself out with beating and prodding without getting on any faster. What a difference it makes in one's feelings !
When provided with an excellent mount, the blood courses more rapidly through one's veins, one's heart leaps for joy; Nature seems entrancing!
We could not have chosen more beautiful weather — warm sunshine, clear air, a cloudless sky, and the wide, wide horizon, in the far distance, merged in blue
haze. The ground was dry — no dusty stretches, no bogs or fens.

We had to go 5 miles at a brisk pace before we reached the herd we were
in pursuit of. We were beginning to think that the "dobies" had spoiled our sport when, near the so-called Butte de Mackenzie (named for the father of my companion on the chase), we came unexpectedly upon a small group of both old and young bulls. Some of them were lying in the grass near a spring at the upper end of a coulee; others were comfortably grazing round about them. We changed our course at once, rode around the hill, along by thickets of wild cherry and
plum trees that covered the coulee, in order to fall upon the buffaloes unawares. But the sound of hoof beats had already warned them; those we had seen lying on the grass had sprung to their feet, and, with tails aloft, speedily took to flight.

At a mad gallop we crossed the brook and followed close upon the fleeing herd. Even the horses shared our eagerness and tried to outdo each other, but I allowed Mackenzie to get ahead so that I could observe him. With his keen eye he had already selected his victim, approached within 2 feet, and fired. So true was his aim that the animal lay dead as I passed on a gallop. It might be truly said that suddenly he fell to earth. In the grip of death he groaned, beat the
ground with his hoofs, and rolled over on his side. So accurately had the ball pierced his heart that I thought at first he had fallen from sheer fright. But we went much farther. I had a great desire at least to shoot at a buffalo. Mackenzie bade me follow him; we set out again at a gallop and came up with the herd.

Kurz described his own achievements at hunting bison and then drawing in situ:

He singled out a bison for me and forced the animal apart from its companions. I pursued it over the rolling prairie until I was so close I couldn't miss aim.
At my first shot the ball entered just a little too high; he turned in such a way that my second shot struck his right knee.
Then Mackenzie rode forward and in passing the old fellow sent a bullet into his heart.
The pouch swung across my shoulder was a great hindrance when I was shooting, because I was forced to keep it in position with my left arm and yet found it difficult to do that and at the same time fire a gun.

While in full chase, drawing nearer and nearer the fleeing herd, we reloaded our rifles. Mackenzie was laughing the while at the wounded buffalo, who was trying to run, notwithstanding a bullet in his heart. In truth he was killed ! He could go no farther. All at once he stood as still as a block and looked angrily toward us, his nose dripping with blood. I reined in my pacer and took aim, intending to shoot the animal in the head and bring him down. My horse, all
in a heat from the swift gallop, could not stand quietly; he snorted, he foamed, he pawed the ground; as a result, my shot went amiss, merely grazing the forehead of the monster. He hardly moved his head. But he began at last to sway, placed his feet wide apart to balance himself, but nothing could help him more. He was obliged to come down, first on a fore knee, then on his side. The beast was too thin to serve me for a model buffalo; therefore, we left him lying
there and rode back to the first one we had shot. We dismounted, tethered our horses with long halters, and allowed them to graze while I made as exact drawings as I could, showing different views of the fallen bison. As soon as I had finished my sketching, Mackenzie cut out the tongue and other choice bits of meat to take to his wife. Then we galloped home.
What joy !

ps
*Mr Denig, the factor (manager) or bourgeois at Fort Union - as described by Kurz himself [page 120]
Bellange delivered the letter he brought to a small, hard-featured


man wearing a straw hat, the brim of which was turned up in the back.
He impressed me as a rather prosy fellow. He stopped Bellange short, just as the
latter was beginning a long story he wished to tell; on the other hand, he ordered
supper delayed on our account that we might have a better and more plentiful meal.
A bell summoned me to the first table with Mr. Denig and the clerks. My eyes almost
ran over with tears ! There was chocolate, milk, butter, omelet, fresh meat, hot bread —
what a magnificent spread ! I changed my opinion at once concerning this new chief;
a hard, niggardly person could not have reconciled himself to such a hospitable
reception in behalf of a subordinate who was a total stranger to him.
After we had eaten he apologized for not having a bed in readiness for me;
that night I must content myself with buffalo robes in the interpreter's room;
better arrangements would be made next day. [...]