Salve,
Gyula Benczur was a Hungarian genre painter, and amongst his many works he painted this canvass showing the taking of Buda in 1686 during the long war between the Ottoman Turks and the Holy League.
The battle saw the fruitless but heroic defense of the fortress by the Turkish (and presumably Jewish inhabitants of this 150 years old Ottoman town)  defenders and the masterful strategy and ultimate victory by Charles V duc de Lorraine.

During the siege both the defenders and the besiegers used large artillery pieces, including very large mortars. There is a very interesting article on the Ottoman firearms and artillery via academia.edu
Nota bene the long siege saw several cavalry engagements between the besieging regiments and approaching Turkish relieving forces. The Turks were defeated and thus Buda was stormed by the besiegers, followed by looting, rape, pillage and massacres of the defender population.
For the British readers this fateful siege can be of much interest, because of the participation of numerous subjects of king James II, volunteers in the noble crusade against the Turk. There is also a journal of the siege written by Jacob Richards and published in 1687.
Interesting article on the British military participation in the siege can be found here.
Maestro Gyula painted this huge , wonderfully crafted piece 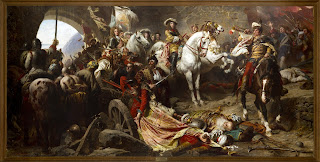 The Kingdom of Hungary, now reduced to a pitifully smallish Hungary, had been famous for the war and riding horses since the  Middle Ages. During the Hapsburg rule in Hungary, after the wars against the Turks in the XVII c.,  various stud farms had been established, including Bábolna, Mezőhegyes, Radautz, Piber, and Topolcianky etc. The horses in this painting represent the horse breeding achievement of that Hapsburg period, thus horses contemporary to maestro Gyula's times.
But look at these horses, please :) 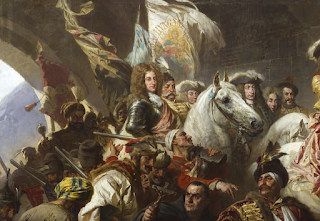 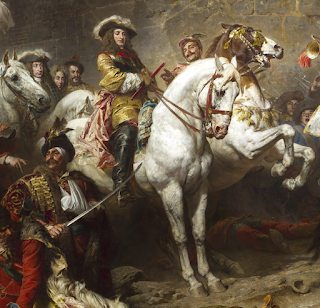 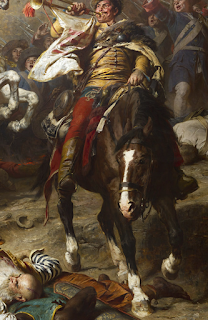 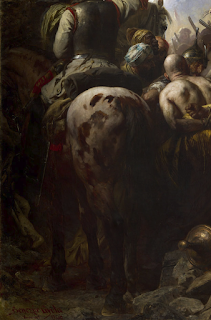 modern 3-d visualization - in Hungarian - and the video, separately, on Vimeo
enjoy
ps
I am a bit baffled with the lack of digitized British pre-1800s books or I have not encountered their general access site (other than google books which I am not very fond of), on the opposite end sit Polish libraries where the librarians are digitizing their collections and archives in tens of thousands, all available for free. The French Gallica or vast German digital libraries are other great places of research.
Posted by Dario T. W. at Friday, July 08, 2016