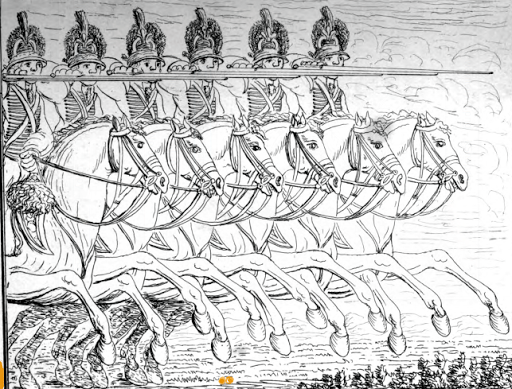 (again, second half of the XVIII century):


''Another time a curiassier's horse fell, in the grand attack at the exercise of Breslau, the cuirassier got him up again, and mounted him; at three hundred paces he fell down dead. The late General Krokou, (Colonel of the regiment), had him opened, and it was found that the sword of the curiassier had penetrated his heart a tenth of an inch. These facts prove that a horse is not easily to be brought suddenly down, unless a ball should break his scull.''

Horses of the cavalry regiments of the day, note that Great Britain is excluded, curiously so... while the Polish, Hungarian etc horses were mentioned  my earlier post on the uhlans.

'' The House of Austria, as well as the other Princes of Germany, France, and Sardinia, procure horses for their curiassiers, and other heavy cavalry, from Lower Saxony, particularly Holstien, and from Friezeland, which are not the most approved: but where are better to be procured  Austria has, in her vast estates of Germany, enough large and strong horses, but they are more proper for draught than the saddle; it would be easy to remedy that by procuring stallions from other countries, after having made experiments which would most improve the race of horses intended to be bred.

''The Swiss afford art example of this kind, before the last war in Italy their horses were the worst in Europe: but when the Spanish army marched into Savoy, a great many Dragoons and other troopers, who are in general mounted upon stone horses, having deserted to them, the Swiss purchased their horses, and I am assured that they have at this time a breed of horses, very very proper for the service of cavalry, but it is very certain that they will again degenerate unless they continue to supply their studs from the fame, or other foreign countries.''
''Notwithstanding that the states of the King of Prussia furnishes pretty good horses, that Monarch does not make use of any of them in his army, he purchases those for his curiassiers in Holstien, and those for the Hussars and Dragoons, are procured from the Ukraine; within these few years arrangements have been made to breed horses in Silesia, proper for the cuirassiers, but I very much doubt their success.'' [ I guess de Warnery was wrong, hence the Silesian horse finally came out as its onw breed  in  early XIX century]
''The Danes and the Hanoverians have the finest horses of the north, and they are very high priced, but as the troop horses are the property of the captains, their cavalry is not superior to those who are not so well mounted, for the reasons before suggested.''

''The Swedes and the Norwegeins, have nothing but nags: ''