we live in the world of films and images, and also consumed historic weapons reconstructors and reenactors.

One of the world premier  personages in the world of televised reconstruction and reeactment is Mike Loades who is, among others, a horse and chariot archer - check out the films on the Egyptian or ancient Chinese chariots where Mike was the chariot archer.

This video is dedicated to the critique of  weapon, armor and military concepts as presented in a number of popular medieval-themed video games, including Witcher 3,  and it is master Mike's review done at a nothing slower than a gallop.

**
Now, this being the XXI century and the world of instant checks on statements made, we have this opportunity to enjoy equally galloping review and commentary on Mr Loades' review.
It was produced and presented by a youtuber known as Shadiversity who himself is a reenactor and a practitioner of HEMA, user of bow and arrows, and obviously a sword etc - so his commentary  is informative and engaging.

*
Gallica French National Library digitized  some of the XV century manuscripts with illuminations by Robinet Testard - I will bring here some of his illuminations in the near future.

Just look at these beauties - I daresay it would be lots of work and fun to copy this illumination, be it  in watercolor, gauche or acrylic paint, or even oil or digital brushes 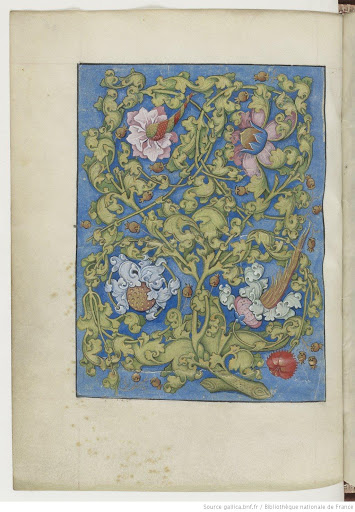