Salve,
new month and let us start with something very metalic - the XVI century suite of armor - for the horse and rider.
the armor used to belong to His Royal Majesty Sigismundus Augustus (Sigismund August) - the Jagiellonian king known in Polish as Zygmunt II August - and his sumptuous armor .
In few words he was the least warrior-like from the Polish XVI  century rulers, but his armor suits were most likely the most elaborate and absolutely the most beautiful.
But he was also blessed with a number of very good field commanders, including the famous starost of Bar Bernard Pretficz, who used to raid the Ottoman and Tatar possessions on the northern shores of the Black See. Perhaps one day I will write and illustrate a post or two on Pretwicz ( written -  Bernard Pretficz, Bernard Pretwic, Bernardus Pretwitz, Prethwicz, lub Prettwicz), who was a Silesian gentry of the Wczele coat of arms. 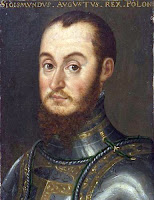 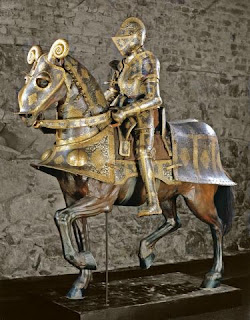 Sigismund's reign saw the growth of the lancer cavalry aka winged hussars within the Polish and Lithuanian horse banners, and these armored lancers played the most vital role in many wars and battles of our good king's rule. We have some muster rolls from the period where horses are lsited by their type - lancer, parade or bowman - and their color.
The military history of this period is least known outside Poland, Russia, Belarus, Lithanian, Latvia and Ukrain, Hungary and Romania... ps
last night I started watching the move 'The Dig' about the discovery of the famous British Sutton Hoo kurgans and their Anglo-Saxon deposits - nice film, commendable  on the drama part. Imediately I started to think what if the Chinese made a feature film about the First Emperor Tomb, or Russians about the the Pazyryk kurgans, or Polish filmmakers about the Biskupin discovery. So many good stories out there.