Salve,
as tradition demands a MyPaint sketch of a XVI century Silesian noble with a chart polski.   Going along my point of interest, i.e., cattle driving accross Polish Crown and Silesia into Germany, then the  old Piast cities of Wrocław and Świdnica were big cattle markets for the Polish oxen, and later in XVIII century also horses. 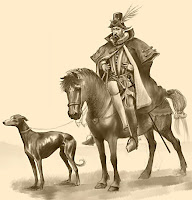 Silesian nobility, with their roots deep  in the Piast Poland while augmented with the blood of German and Bohemian nobility of the Holy Roman Empire, was often seeking employment with the Polish Crown and her magnates, although as often fought against the Polish Crown, especially under their own Piast dukes during the later Middle Ages and later in the employment of their Hapsburg emperors, eg battle of Byczyna. The most famous Silesian nobleman who achieved great fame and success in Poland during XVI century was this great knight and military lord Bernard Pretwicz, "Wczele"  coat of arms,  known in Poland as Murus Podoliae and Terror Tartarorum. One day I would like to write more about his numerous deeds, amongst them there is a legend of unicorn's horn.
Posted by Dario T. W. at Friday, March 22, 2013