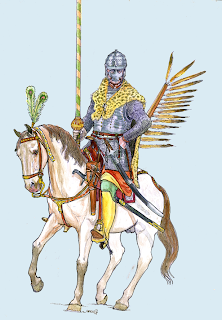 czolem,
as mentioned husaria of the Old Poland appeared often in her poets written work, from Mikolaj Rey (Rej) od Naglowice  http://en.wikipedia.org/wiki/Miko%C5%82aj_Rej to  Waclaw Potocki  http://en.wikipedia.org/wiki/Wac%C5%82aw_Potocki and mentioned already poet and soldier Wespazjan Kochowski.
Often these references were not direct,  for especially in the second half of 16th century ( XVII ) a noble knight ('rycerz') would serve mounted  with a lance ('drzewko' or 'kopia')  and need not be called a 'husarz' (winged hussar) for the audience to see him as one (even our best poet of this period Jan Kochanowski http://pl.wikipedia.org/wiki/Jan_Kochanowski was described when welcoming king Henry in Cracow, dressed as winged hussar) ,  so for example one of the prolific writers  Marcin Bielski  http://en.wikipedia.org/wiki/Bielski,_Marcin  wrote  in one of his satires 'kto chce w potkaniu pozyc dobrze Moskwicina, przytrzy nam predko z drzewem jak na Tatarzyna' ( one that wants to press hard a Muscovy soldier in a fight, needs to attack him quickly  with a lance in the same manner [one would do]  against a Tatar) ' Sen Maiowy' (Dream of a Hermit, 1586).  It was understood that one attacking with a 'drzewo' (lit. wood,  actually a lance) was a winged hussar.
Often our poets would talk about hussar appearance and interesting information can be had from these verse as in Wacław Potocki poem where poet (who very often was a great satirist and comedian in his work) only recognizes a winged hussar by his costume details - 'karwasze' (warmbraces or forearms protectors )  and one wing (poem 'Pogonia Litewska', from  a compilation titled 'Ogrod Fraszek' written between 1675-90 but published in its entirety in 1907).
Potocki, having often written about war and politics in his poems, will often be revisited here (God willing), as many of his works have to do with fine horses and riders, their adventures and misadventures as well  - :)
Posted by Dario T. W. at Monday, February 01, 2010

How interesting! I didn’t know that.