Salve,
I am turning again to our best friend from the XVII (17th)  century, imci Waclaw Potocki, a bit ribald and always a satirical poet-nobleman.

This time our gentle master tells a story how a Frenchman, one of many that had come to Poland during the reign of Jan (John) III Sobieski ( http://en.wikipedia.org/wiki/John_III_Sobieski ) seeking protection and riches from the Queen Marysienka (Marie) Sobieska,  challenged to a sword duel one of our winged hussars (presumably a nobleman- towarzysz, and not a retainer).
Hussar took a pallasch (in the second half of the 17th century most likely it was a sabre) and the Frenchman chose a 'sztokada' (long fencing sword), and our hussar  told him to change it for a rapier or a small sword [to even the odds]]; the Frenchman responded that no Pole would influence the fashion the French fight, but  to which our hussar replied immediately to his retainer that no Frenchman would tell him what to fight with and took his primary weapon, i.e., the lance. Having aimed his lance from about a distance of a pistol shot hussar charged aiming at his breast and this sight so frightened the Frenchman that with a wooden fence nearby he ingloriously run jumping over a fence and hiding behind it.  And from behind the fence he called:' you are very long, Mr Pole.' Our hussar replied without hesitation: 'you were long to my short[sword],  but once I got longer to your short, then even a dog could not have jumped over the fence so fast...'

Several interesting aspect of our hussar martial arts can be observed here, namely, that they aimed their lances about a pistol shot from their target, that they aimed their lances' points at the foe's chest, and that still in the second half of the XVII cetnury the lance was longer and deadlier than a longest sword, as long as one knew how to use this dangerous and deadly weapon. 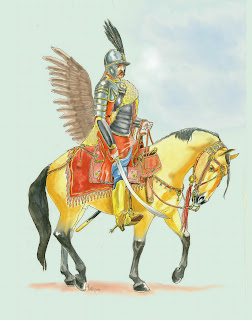