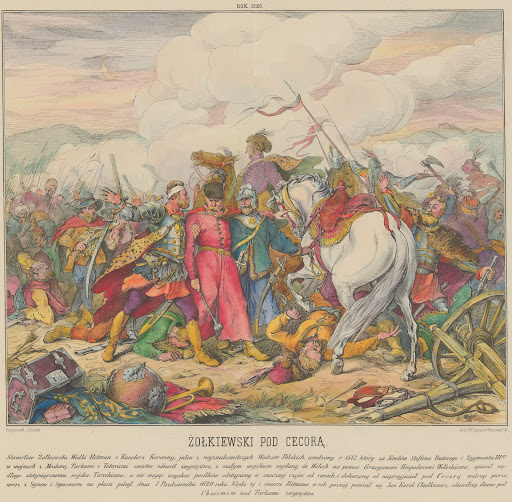 401 years ago, in the vicinity of the Dniester River the last act of the military tragedy was  unfolding.
Our Polish-Lithuanian army had been  in full withdrawal from the war laager at Cecora on the River Prut.
After the unsuccessful  Cecora battle, during the night of 20-21st of September 1620AD, our Polish war camp underwent a violent and long bout of disharmony, desertion, open rebellion and  especially  atrocious thievery and robber committed by the camp servants and some unruly elements among the troops, especially accused were the Lisowczyk kozaks.  In light of the threat posed by enemy standing menacingly across the field from the Polish ramparts, the commanders and officers brought the camp to some semblance of order and obedience.  The crimes were not mentioned and left unpunished,  the loss of several thousands who deserted cross Moldavia to the Polish border was hurtful but they pulled the troops in some sort of cohesive army again. When the negotiations with Iskander Pasha failed the plan to withdraw to the Polish border was announced and preparations carried speedily.

The tactical withdrawal started on the 29th of September 1620, two hours after darkness when grand hetman Zolkiewski, field hetman Koniecpolski  and  about 5,000 officers, soldiers and an unknown number of armed servants started their  march away from the safety of the Cecora war laager rampart  and moved  this moving fortress toward the Polish border,  in a wagenburg (wagon fort) formation:

- vanguard, then the entire cavalry horse herd,  6 files of 100 wagons each pulled by horses and chained, finally a rearguard with small field-guns and infantry. Winged hussars, pancerni kozak, Lisowski kozak soldiers marched on foot along  and on both sides of this fighting moving fortress, their pistols and carbines ready and charged. Wounded and sick were carried inside the wagon train, in the wagons etc.

Namely, first they fought  for 3 days a very tight  rearguard action Sept 30-Oct1-2, 16620, then  beat off another assault on October 4, and the final assault during the night of October 5-6, 16620. Polish army fought well against all these  assaults and successfully repulsed all of them.

Finally,  the tired army marching  its wageburg formation and maintaining military order had  reached the vicinity of the border (some 10 km to the river and then across the river there was Polish border stronghold of Mohylow, today Mohyliv-Podolskyi), near Sawki (the present day village of Sauka) and was resting, while in its immediate vicinity there were columns of  Tatar units circling around, mostly Kantemir murza command.  They marched circa 165km in six night marches, under lots of pressure, with exhausted troops under the almost constant assault of their merciless foe.
It was there, in the camp during the evening of October 6, 1620, when some of the aggrieved officers and companions demanded that our grand hetman Zolkiewski punish those guilty of the robbery and thievery during the rebellion and general desertion and panic  back on the 20-21 st September.
Upon hearing the demand for punishment and return of the stolen property, the camp servants and soldier rabble rebelled and started breaking up the wagon formations,  unhitching the horses and riding away towards the safety of the river. The panic and rebellion spread from the rabble to the troops thus far disciplined, and entire banners dissolved and  unraveled. Within a short while the army ceased to exist. One of the first to run was the famous rider and commander prince Samuel Korecki - who eventually betrayed by the Moldavians, and was captured by the Tatars, delivered to the Ottomans and died in a Turkish prison in 1622.
Grand Hetman Zolkiewski, with his second in command field hetman Koniecpolski,  at first refused to abandon the wagon fort but lacking the necessary soldiers to fend off another Tatar attack and with the light coming from  the burning wagons he  saw the helplessness of the situation and  thus started marching towards the Dniester river,  leading  some most faithful and disciplined troops, the last remainder of the once proud and powerful Commonwealth army. After about 1,5km to 3km of night marching from the burning and looted wagenburg this last  Polish command was attacked by a large body of  Tatars, who dispersed the exhausted troops, killing and slave taking during this terrible night.
Grand hetman was left with a small group of  cavalrymen, mostly German reiters of Donhoff company along with some faithful like field hetman Koniecpolski, wounded captain Donhoff, winged hussar Abraham Zlotopolski(he survived and made it across the river) , servant Kurzynski, and Silnicki.

He refused to mount a horse brought by a servant, killing it with  his sword and saying -
-'I am not going to mount [a horse], it would be sweet dying along with you. Let God finish His judgement over me'

So they walked another several hundred of paces, and finally Koniecpolski and Zlotopolski forced our  tired old hetman into a saddle of another horse brought for this purpose.  Some disorganized Polish  cavalry band appeared from the darkness and grand hetman rode away or perhaps his horse carried him away with them, never to be seen alive again.
His body, with signs of struggle, deep wound on his head and without his right arm, was found and recognized by the Kantemir Tatars about 5km from the river on the following day. They left the body where they found it and Zolkiewski's wife, Regina Zolkiewska,  who had sent a special group to find his body, later on  she had a monument built on the spot ( but it no longer exists, destroyed in 1890s).

Iskander Pasha ordered the severed head to be taken as a trophy to the very Ottoman sultan's court. The head was displayed in Constantinople.

Only about 3,000 soldiers, quarter army, private and Lisowski kozaks (many of them from the September 21st deserters group under Odrzywolski and Chmielecki) , got away to the safety, along with unnamed number of camp servants. The remainder was dead or in captivity (like the wounded and sick in the abandoned wagon fort) to be ransomed or perish there, including field hetman Stanislaw Koniecpolski, Jan Koniecpolski, Mikolaj Strus, Samuel Korecki, janusz Tyszkiewicz, Jan Zolkiewski, Lukasz Zolkiewski, Mikolaj Potocki, Zaporozhian Cossak Samuel Koszko and still very young Bohdan Chmielnicki  and many many other officers, soldiers and camp servants. Some were sent to the galleys, to row to their death the Ottoman boats, others died in captivity being slaves to their Ottoman masters.

Stanislaw Zolkiewski died a heroic and epic death, fighting for his king and country.