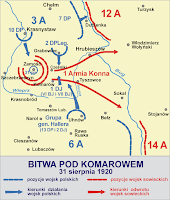 There are surviving memoirs and recollections written by the battle participants, one of those is a published memoir written by the 8th Uhlan Regiment commander rotmistrz (rittmeister)   Kornel Krzeczunowicz , Ostatnia Kampania Konna (The Last Horse Cavalry Campaign).
General Rómmel wrote his recollections - Moje Walki z Budionnym, (My War against Budionny) Lwow 1932, but I have not read them.
This very year, during the  weekend of Aug. 29-30,  various Polish cavalry reenactment associations (and a detachment of fine  Bavarian Uhlan reenactors) brought horses, reconstructed horse tack, and reconstructed uniforms and arms and etc in order to take part in a large, festive commemoration of the battle: the gathering included the reenactment of the battle itself, more than 400 cavalrymen and women, a logistics feat and achievement.
The festivities, on the eve of the battle anniversary, were official  with Polish national and local government participation; especially with the participation of the Polish Armed Forces.
And with some participation of the public spectators - due to the current limitations on public gatherings etc.
There is this article by Nowy Kurier Zamoyski on the battled reenactment - plenty of photos.

I am pretty sure that shortly  the net - especially many the Facebook pages similar to these I linked already - will be full of great and fine photos from this event in Poland; the words is that many fine photographers went over there in order to document this historic event and make some glorious art.

***
There is is issue of the monument.
In 1936 in Poland this competition was called for creation of the cavalry monument commemorating the battle, and talented Polish architect Borys Zinserling won the first prize for his project titled 'pomnik Chwały Kawalerii i Artylerii Konnej' ( Glory of Cavalry and Horse Artillery monument). Once completed the monument would have been erected in Wola Sniatycka, hill 255, where on August 31 the most decisive and bitter combat between the Polish and Russian horsemen took place.
World War II and subsequent Soviet rule in Poland until 1989 delayed the construction of the monument, and even the newly restored independence did not hasten this project at first.
Fast forward then to 2007 when the idea of building the monument was resurrected among Polish historical groups and cavalry associations, and during the next 10 years the design had been worked out and improved, but the artists were working along the lines of the original project from 1936, i.e, the magnificent winged hussars0style  eagle wings overlooking the battlefield.
In 2018 various organizations and many good willed people came together to finally start sculpting and to build the monument along the newly redesigned project.
Today is the 100th anniversary,   the moment is very close when the monument will be erected in its rightful place.
It is going to be glorious (and very tall) once finished as evidenced by the images below, and many other images on this page: 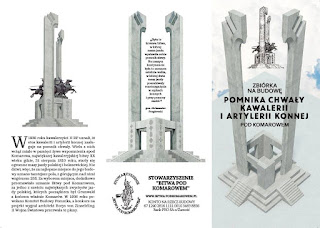 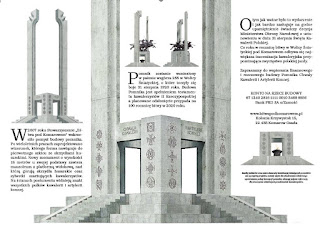 Rómmel book is very good, I have Czech translation from 1930's If You want I can send You beautiful illustration cover from Zdeněk Burian. I'm not sure about sending You my review earlier.

hi Vavca,
no you have not sent me your review earlier.
Yes, I would love to see the illustration by Zdenek Burian.
cheers