on this day the Nazi German Wehrmacht  and Slovak armed forces begun the invasion of Poland. It started with the German battleship Schleswig-Holstein firing a broadside salvo at the Polish garrison of Westerplatte in the Free City of Danzig/Gdansk at 04:45/47 AM.
Polish allies - France and United Kingdom - declared war  three days later, on September 3rd, and the drole war begun, with the French air force droppingleaflets instead of bombs on the German lines in western Germany...
***
Polish people around the world commemorate this day - this was the beginning of the greatest human, cultural and economic tragedy in the history of Polish peoples.
last year I wrote some about the battle of the border in the Silesia and south-western Malopolska (LittlePoland). 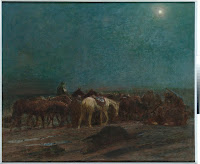 Today I am just going to commemorate this tragic date and add this image of two paintings with horses - September 1939-  by one of the preeminent XX century Polish painters and educators Michal Bylina, who was a Polish soldier and cavalryman  in 1939, academy of art professor after the war.

The transport during the September 1939 invasion of Poland was mostly powered by horses and in the photo below we see civilians and Polish policemen in  horse transports in Zwolen, in Lesser Poland - among many things the town is famous for being the place of 'prebenda' of one of the most important Renaissance Polish poets Jan Kochanowski, Korwin coat of arms.

German Luftwaffe bombed the town in September 1939, among many buildings they destroyed this Jewish synagogue originally built in 1834.

Germans organized a ghetto for the large Jewish population of Zwolen, separating them from the gentiles.
Out of 5,000 Jewish residents of Zwolen in 1939, about 73 were counted in 1946. 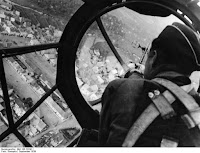 Bombing of cities, villages and columns of fleeing civilians was the 'new' way of war, the total war

First Polish city to suffer this new German way of war was Wielun bombed on September 1st - actual number of inhabitants killed during this atrocity unknown and 70% of the town destroyed.

see the photo gallery.
the Germans were killing prisoners of war right and left, one of the infamous early massacres was the massacre of 300 Polish prisoners of war  from the 74th Upper Silesian infantry regiment in Dabrowa near Ciepielow on 8-9th of September 1939. 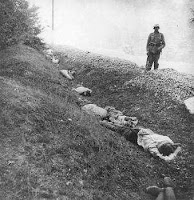 Civilians were killed right and left

using already prescribed long lists of influential citizens and their families,  conscripts and mentally ill patients from hospitals etc; so the so called Katyn Forrest Massacre perpetrated on the Polish officers by the Soviets in 1940 is but one of  countless atrocities committed by the victorious allies on the Polish citizen, with the  Germans killing the elites by tens of thousands or perhaps by hundreds of thousands  in western and northern Poland between September 1939 through the summer of 1940. 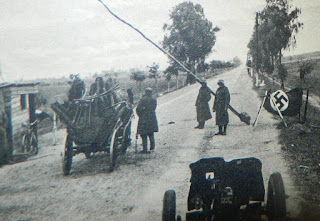 so starting on September 1, 1939 Germans, and later their erstwhile Soviet allies inflicted atrocities upon atrocities, murder, mayhem, robbery, pillaging of art and cultural objects, pillaging of natural resources, slave labor, extermination, and forced abortions - all in order to reduce the proud Polish nation ( mostly farmers and small town dwellers prior to September 1939) to a subhuman and slave-like people. They bloody failed! 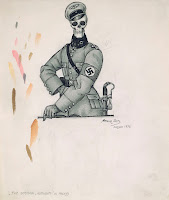