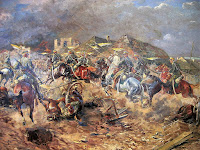 Polish cavalry (and mounted artillery) as a branch of Polish armed forces was reborn during the fighting on the Eastern Front of the World War I and various cavalry squadrons, dyons and  regiments sprung into action with the rebirth of the Polish Republic (sadly not as  Kingdom of Poland, eh, all those socialists at the helm back then and now - :) ).

Polish cavalrymen came from mainly three varied cavalry traditions - Austro-Hungarian, Imperial Russian and Imperial German. There was also French (the Haller army) influence but it was not very noticeable due to the size of those cavalry units.

The War Ministry created a separate staff body - the Generalny Inspektorat Jazdy or GIJ (the Inspectorate General of Horse) on January 22, 1919, while at the same time they maintained another staff office called Sekcja Jazdy (Horse Section of War Department). And both administrative bodies overlapped and conflicted a bit with one another.
First General Karnicki was the head of the GIJ, but he left for the front and general Kawecki became the Inspector General of Horse in August 1919.
So the regulations and manuals and actual practices on schooling and training of the cavalry in training seemed to reflect the above mentioned mix of traditions. The IGh and his staff favored the Austro-Hungarian and Imperial German traditions hence they published directives etc in that spirit of good manege riding and preparation, while the majority of the field officers of Polish cavalry had been trained and experienced in the Imperial Russian field practices.  For example the first cavalry regulations were adopted after the Imperial Wehrmacht one published in Berlin in 1917, and the first 'temporary' regulations were published in May of 1920  (Jerzy Grobicki, Organizacja Kawalerji Polskiej w latach 1918-21. Przeglad Kawaleryjski Nr 3 (77) p.215).
Thus the squadron and regimental replacements coming to the front had to be retrained in the field cavalry practices, and varied from regiment or even squadron to squadron.
But this was the time of war, where practice was tested with blood and mortality.

The GIJ 'failed' to promulgate and enforce the uniform system for all regiments in terms of arms, training and uniforms - but then the lack of equipment, arms and horse tack forced the government to purchase available on the the world market military surpluses - be it American, French etc.
One of the interesting aspects of the Polish military of that period it the very fact that  many landowners and wealthy peasant farmer and other citizens provided their own arms, uniforms, horses and horse tack throughout the duration of this war.

Things came to change for the cavalry regiment  in 1921 and again in 1924, but that is another story. 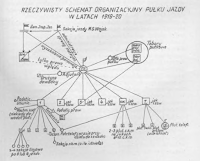 I will add the English translation for this diagram in the future.

ps
Polish cavalry of that war is beautifully described in a book by a Polish scholar and novelist Bohdan Królikowski titled  '' Ułańskie lato (The Uhlan Summer)'' (and it does need to be translated into English).
I am not going to talk about the Osprey Military Publishing attempt at the subject..
Posted by Dario T. W. at Monday, August 31, 2020