Salve,
final fragment from Mr. Batty. This time author gives us his observations, views, prejudices, and finally his understanding of the American Indians and their hunting in general.


An Indian, notwithstanding his warlike propensities and distinguishing characteristic of cruelty, when in the prime of manhood fully equipped for the chase, is a picture that cannot fail to call forth admiration.

Iron-jointed, supple-sinewed, he mounts his pony, and with bird-like grace and freedom rides at lightning speed, leaping the saddle from side to side in a manner almost incredible to relate. When not under excitement the Indian has a patient, inoffensive look, and one would scarcely think he was capable of committing the cruelest of deeds.

The Indian is a perfect hunter, but not a good shot. He is most patient in waiting for game, and will lie for hours as noiselessly as a cat watching a mouse. The most intense heat of the sun on the plains does not seem to affect him, and he will often lie a whole day at a water hole waiting for game to come to drink.

Indians hunt more or less in the Summer, but the Great Fall Hunt is the event of the year, and in it they seem to find the most perfect enjoyment and great excitement. At this time meat is killed and cured for Winter use. They hunt but little in Winter, and then chiefly in pleasant weather, going but a short distance from camp, on foot, as the ponies are too thin to carry them.

There are laws in some tribes that forbid an Indian to hunt alone far from camp. If found hunting on the sly, they are soldiered, that is, have their clothes cut to pieces on their return to camp.

They prize a good gun highly, and appreciate the points nearly as well as our own people. The brass-mounted Winchester carbine is their favorite gun for hunting or war. We were quite amused in examining the guns of one Indian camp. Some had the most common of shot guns, cut short like carbines, many had the pea rifles, and occasionally a double-barreled gun was seen; there were many old muzzle-loading Springfield muskets and Spencer carbines, and now and then a Ballard; large bore muzzle-loaders, however, prevailed. Many of the Dakota (Sioux) and Assineboine* warriors carry good Government needle-guns. Sharpens* carbines and brass-mounted Winchester repeating rifles. The stocks of the guns, and their belts and saddles, are ornamented with brass nails driven in every conceivable form. The Sioux and Assineboines are tall and muscular, and look as though they know how to use their guns; they wear canvas and leather cartridge belts like the whites, which are generally well filled with fixed ammunition. 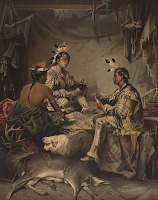 An Indian will barter anything for ammunition, even a valuable robe, or blanket from his back. When I was crossing Montana, Indians came about and tried to trade for cartridges ; it was quite amusing to see them continually show their empty cartridge belts (which had been cleaned for the occasion) and urge our party to trade. They offered pemmican, jerked meat, robes, skins, gun cases, moccasins, and tobacco bags ornamented with porcupine quills and beads, and filled with Kinnikinic*. I had a heavy belt of the extra long central fire cartridges with patched balls, which were new to them; pulling out a ball from a cartridge and handing it to a buck, he examined it carefully, passed it to his comrades, then returned it with a grunt of satisfaction and uttered the word ** wash-ta" (good). 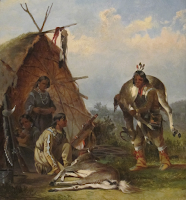 Some Indians foolishly chew their bullets until they are so rough they can scarcely be forced down a rifle. I told one Indian that it was "bad medicine," and the bullet would not go straight; he took a badly marred ball from his pouch, pointed to it and said, " good medicine, heap kill deer."

They accepted fire-arms rather doubtfully at first, but now nearly all Indians possess one of some description.

There were two kinds of bows used by the aborigines: the short stiff bow for buffalo and war, and the long bow for small game. The latter is seldom used now among the Northern Indians, they preferring the short bow, as it is more easily carried when riding in the hunt or fight. The Eastern Indians used the long bow; the Seminoles used one of medium length, between the long and buffalo bow.

All good Indian bows are strengthened by sinew, which are stretched lengthwise, and around them. The sinew from the back of the buffalo is generally used, as it is long, flat and fibrous, and can be split into any width of band, or size of thread.

The heavy bows have broad strips of sinew put on them longitudinally, and are cross wound over with shaganapa* or rawhide, and fine sinew.

The arrow heads and feathers are fastened to the shafts with the same material.
There are two styles of arrow heads, the long for buffalo and the short for general use. The flint-arrow head has disappeared among all the tribes I have seen.

Arrows are deeply notched to receive the heavy rawhide string of the bow, and their ends spread, to prevent their slipping from the hunter's grasp. The Indian hunter prizes his bow as much as a rifle, and it is a difficult matter to buy one, without paying a fabulous price. 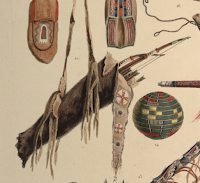 The bow is used with great care and carried in a cover of leather or fur.
Indians often make bow cases from the skins of their dogs, but some of the great warriors have covers made of otter skins. A large otter skin with a perfect tail to protect the bow is invaluable. Skins of albino animals are also highly prized for quivers and bowcases, and the skin of the white buffalo — more common than is generally supposed — is considered " good medicine ;" they think the Walkatonka* or Great Spirit, favors those who wear them.

Quivers are also made of leather and fur skins, ornamented with beads, colored porcupine quills and fringe, and are usually strung from the right shoulder.
The short bow is a very effective weapon in close quarters, and with it the average Indian can discount all breech-loading rifles, except a repeater.

An Indian will bury several arrows in a buffalo in a few moments; and a dozen or more of them armed with bows, in ambush, will make lively work for a party of whites. Whether the Northern Indians have ever used poisoned arrows or not I am unable to state; I have questioned many about them, also trappers and interpreters, and have found no clue to their having been used. Many suppose that the arrows were poisoned with the venom of the rattlesnake, but the Indians are so superstitious relative to killing it, that I do not think the belief authentic. They never fire at one, saying it is "bad medicine," and will spoil their guns.

The young bucks and papooses make bows and arrows of every description, and are continually practising at birds. 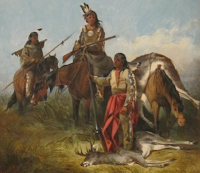 [Indian pony] The Indians hunt more on horseback than any other way, and the endurance of their ponies is wonderful. Although in constant companionship, the Indian has not the least feeling for his pony, and shamefully neglects and abuses him. He is never stabled, blanketed, curried, or even fed. Saddles are strapped on mercilessly, and the pony is ridden cruelly ; if his back be torn and lacerated at night, he is turned into the herd without a thought, and forced under the same saddle the next day. In Winter they have very little food, and become almost skeletons, and were it not for the branches and bark that the squaws cut from the cotton-wood tree they would die of hunger ; as it is, they are pitiable objects with their shabby coats and extended hips; but when Spring comes and food is plenty, their transformation is wonderful, and they are ready to perform the cruel tasks of their remorseless masters. Although a slave to the Indian, it is a singular fact, that stabled and fed in the hands of a white, 'the pony becomes stubborn and even dangerous ; like many of the human family, prosperity does not agree with him.

It is generally supposed that Indians never make use of dogs in hunting, but do their own driving on foot; there are, however, some tribes that use dogs success- fully in the chase. The Chippewa Indians surround a favorite feeding ground of the deer, and one of their number turns the dogs loose in the centre. Some of them are well trained, and hunt independently of each other, and several deer are often killed at one drive. The number engaged in the hunt is regulated according to the number of runways to be manned. Large parties often split up and hunt in localities suited to their number. The Chippewas occasionally still-hunt singly, having trails cut through their hunting grounds as nearly parallel as possible; there are then no twigs to obstruct the view, or dead sticks to crack and alarm the game.

A great number of dogs are seen in every Indian village, though we saw more with the Crows than with any other tribe. There are no pure blooded dogs, nearly all being crossed with the wolf. 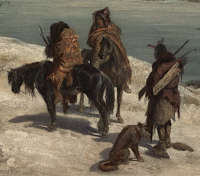 In the Winter they are disconsolate, half starved looking creatures, but during the buffalo season they fare sumptuously and become very fat. These dogs fight savagely, much to the delight of the young bucks, who never separate them, but let them fight it out. The Indians make an article of food of their dogs, and tan their skins for mats. They also use them to haul sledges and carry light packs

Dear Dariusz, as a little child (ages ago) I was interested in American Indians and since that time thought that they didn't use saddle for riding, but in some pictures in your blog I saw saddles used by them. Can you tell me more about this "crucial" aspect of riding. Maybe you wrote about it already- can't find ;-( For me as user horses it is a bit strange- riding without saddle- an agile person can do this till moment of riding along hills and hitting him/herself against horse whites isn't nice at all.
Than maybe you can expllain me something about this, thanks. Gosia

How Gosia - :)
thanks for the comments
no, I have not tackled much the issue of saddles and horseback riding of the Great Plains Indians.
I will post more info on the subject - I promise.
But you could keep in mind that during the Great Plains Horse Complex the Indian boys, who took care of the herds of horses, started their horse duties when only 4-5 years old (supervised by their older siblings and cousins) and kept doing this duty for the next 10-15 years.
so more in the future