Salve,
'Mister' Joe Batty back in the saddle, so to speak:

HOW TO HUNT [Buffalo]*
Buffalo are hunted in two ways:
they are still-hunted on foot with a heavy rifle,
or
run with horses and shot with the carbine, army revolver, or Winchester repeating rifle.
***
It is a much more difficult matter to shoot well when mounted than on foot; rifles should not be cocked until an instant before discharging, and the finger must not rest upon the trigger except at the moment of action. Unless these rules are carefully observed, and the utmost caution taken, sudden movements and irregular motions in riding, will sometimes cause the gun to discharge, and the rider to shoot his own horse. In general shooting, hit the game high in the shoulder. Most of the hunters who shoot for market, stalk the game and fire at long range with the heavy Sharpe's rifle.[article on the 1863 and 1874 models]

The large American horse is a rough rider, and unless thoroughly broken to the sight of buffalo, and perfectly trained to rough ground, is liable to stumble, and throw one over his head at any moment. 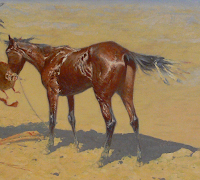 There is but little danger with the Indian pony ; he runs securely and smoothly, and knows how to " lay aside " a buffalo as well as his rider does. The most comfortable way to be mounted is Indian fashion, with double pad resting each side of the pony's spine, as a substitute for a saddle [apishamore]. Moccasins keep the feet from slipping, and enable one to retain his seat with ease. If a saddle is used, the Spanish saddle with the California tree is the easiest ridden and the safest known. With the McClellan saddle, one frequently gets unhorsed; it answers, however, for ordinary riding.
When preparing for the hunt, saddle-bags and blankets are removed from the horses, and saddles are cinched tightly; the hunter then straps a well filled cartridge belt around his waist, seizes his weapon, mounts his pony, and is ready for the run. 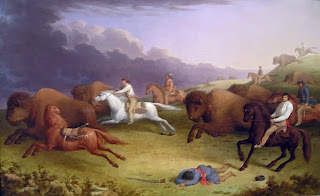 It is quite a feat to shoot successfully from a horse's back, when on a dead run, and one should not attempt it unless he has been long accustomed to the saddle.
When making a surround, the herd is usually sighted from a distance, and the hunters approach from the bottoms, or " coolies ;" it takes considerable time, but is generally successful if managed by veteran hunters. Should the herd become alarmed and stampede before the surround is completed, the hunters rush from concealment and endeavor to turn the herd. Then follows an exciting moment; the yelling of the hunters, rapid running and thundering tread of the buffalo, and constant reports of the guns, with horsemen half visible in a cloud of dust, form a strange, wild and exciting scene, that must be seen from a distance to be appreciated. When one is in the excitement of the chase, he can have no idea of general effect ; he singles out his buffalo, and runs it to the death, and should the chase be a short one, he heads another band and obtains a second run. Buffalo usually fall on their knees with
the fore legs doubled under, and often one horn is buried in the ground. After the hunt, the hunters are called together by signal, and proceed to dress the game.
If the skins are saved they are taken off flat, like cattle hides, salted (except in cold weather), then stretched on the ground, driving stakes through holes in the edges ; but if the flesh only is used, the best of it is cut in flakes and the horses are packed with as much as they can carry. When killed for the market, they are quartered with the skins on, and wagons are used for their transportation.