Salve,
I usually have been staying away from the Romans, doing very few drawings showing their horses and tack.
here I drew a Roman bit used by the Roman cavalry,
So let me take you for a little visit back in time of the Romans and their rigid saddles, just let the images speak for themselves. Please note that it is my belief that the so called horned Roman saddle, whatever its immediate inventor (Celtic or Eurasian steppe warrior), does seem to be a descendant of the ancient Saka/Skuda/Scythian saddles and horse tack
... 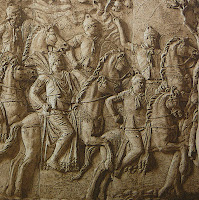 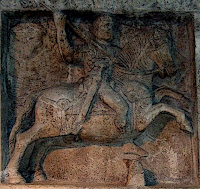 .... Mr. Peter Connolly and his reconstruction in my 'redrawing' 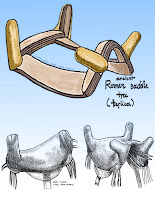 Weißenburg ( Bavaria ). Roman Museum: Reconstruction of an ancient Roman cavalry saddle - actually this one has a very interesting and very logical saddle skirt/flap. 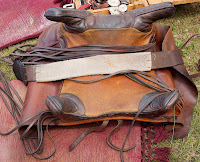 Another reconstruction with full horse tack from Germany 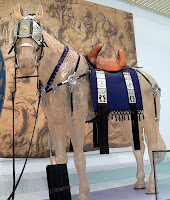 ...
the best English language site devoted to the reconstruction and practice of the Roman cavalry -  comitatus.net/cavalryresearch
Posted by Dario T. W. at Sunday, September 11, 2011

Wow.. that looks so painfull... lol I'm passing this onto my cowboy friends.. lol

lol ... David, thank you for visiting

This is great information for me! I think the saddle is not that uncomfortable but very stable!

Hi Dario. Do you mind if i use this drawing as an illiustrial photo for a paper i am writing on equites?

Hi Jens,
no problemo, sure you can use it - just give me a proper credit, and if you can send me a copy of the paper it will be great!
Is your paper on the equites singulares, equites as cavalry or equites as a class?
I am interested in the Roman history, especially the cavalry - :)

Thank you very much! Of course i will give you proper credit. I am writing about the equites' rise from pure cavalry to a social stand during the expansion of the roman republic and their political struggles with the senate leading up to the fall of the republic. I can send you the paper when i am done, but i warn you: it is in norwegian ;)
Jens

Hey Jens, you are welcome - :)
so my haunch was right - nota bene I have a book on the Republican cavalry, and some other stuff on the equites - very interesting indeed. I read much about the later Empire, and equites played great role during the 2nd and 3rd centuries AD
I am afraid I do not read Norwegian, so will have to use some translation software eg the google translate one
good luck with the paper
cheers