Batty - HOW INDIANS HUNT THE BUFFALO

Joseph Batty wrote on How Indians Hunt the Buffalo [on horseback and in 1870s].
Hopefully in the future I will provide more primary accounts describing the bison hunting techniques of the Great Plains tribal peoples: 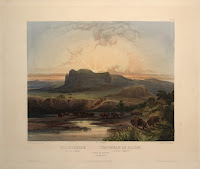 Were it not for the buffalo, the Indians of the southern plains would be deprived of food, and also of bedding, clothing and teepies which the skins furnish ; even now there is so much hunting by the Whites that the number of buffalo are greatly reduced, and the Indian's comfort, comparatively speaking, is already gone. On the northern plains they remain yet in greater numbers, but their final destruction is inevitable everywhere.

The Great Fall Hunt
" The great Fall hunt " is the Indian's harvest and annual feast.
Never is he in such good spirits, never does he hunt with such excitement, and never is his insatiable appetite so gratified.
In September, bands start out well provided with teepies, guns, ammunition and horses. They travel sometimes hundreds of miles before reaching a buffalo country, camping each night when darkness overtakes them. When finally reaching a place where buffalo are known to abound, runners are sent out to sight them. When they return with good news, the Indians, anticipating the hunt, are thrown into great commotion; they strip themselves of all clothing except breech clout, and moccasins, and some deck themselves with feather head-dresses.

Saddles are removed from ponies and riding pads substituted.
Young bucks are sent out to choose desirable camping ground near water, and when a place is decided upon, squaws and trappings are sent for. The squaws get up the teepies, erect scaffolds for drying meat, and make all preparations needful to camp comfortably.
The hunters that have started on their ponies ride until a favorable herd of buffalo is dis- covered, then, as well as diversity of country will admit, they slowly surround them at a distance. It is seemingly understood that they shall all dash forward after a certain length of time, and they come in a fury of speed, yelling inhumanly, and shouting the "whey! whey! whey !" to their horses.

Each Indian singles a buffalo and follows it in every direction, and the form of the surround is lost. So perfectly trained is the pony, and so skilled in hunting is the Indian, that in every effort to turn or get away, the buffalo is pursued as it were in shadow, and unto death. When the first buffalo falls, the Indian looks forward, and if any scattering ones are seen, a second chase ensues. Old men and young bucks not engaged in the fight stand at specified distances with extra horses, and when those in the chase give out, the rider drives up to those. in reserve and exchanges.

The hunting is done as near camp as possible, and the squaws are sent for to skin and dress the buffalo that have fallen within reason- able distance. Each of the animals too far away to be reached, are partially skinned by the Indian who has killed them, and they will often tear the liver and heart from a buffalo while warm, and devour it with the relish of wild beasts; the best meat is cut out in flakes, and piled and tied on the ponies. They are cruelly overladen, and the meat hangs so low on each side that it usually drags upon the ground, gathering much dirt, which is never removed, but allowed to dry in ; then, as if the poor pony was not sufficiently loaded, the Indian takes his seat upon the top of the meat and rides to camp, the pony staggering beneath the load. Both pony and rider become saturated with blood, and neither are ever cleaned. If the chase has been a successful one, the remains of partially dressed buffalos are left; but if not, they return, and the carcass is cleaned and meat taken to camp. Sometimes those who have not been successful in the chase will assist others in dressing game. 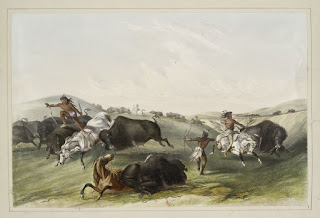 At night a great feast commences, in which men, squaws, bucks, children, and even the dogs participate. Singing, dancing and wild games are enjoyed, and the most immoderate eating that man or beast could be guilty of is indulged in. The intestines of the buffalo are considered the choicest parts, and are devoured by the Indians in a most disgusting fashion. They often eat, at this feast, the greater portion of the choicest meat of the first day's hunt, but on the second day and afterwards, meat is prepared for the Winter.
Day after day the hunt is continued, a chase often being six miles long, until meat enough has been obtained for the Winter, or until intense weather puts an end to the sport.
[...]
The squaws do all the drudgery; they prepare the meat, and hang it on the scaffolds to dry. In damp weather it is often partially smoked by fires being made beneath it when drying. The squaws often skin the buffalo, and always dress and tan the robes. Few skins are used early in the season, except for teepies and lodges.
When the Winter coat of the buffalo is half grown, it is at its best, and the squaws begin to tan robes for trade and their own use. Very strong lariats are woven by the Indians, out of the fine hair from the fore shoulders of buffalo, for which they get fabulous prices.
Some Indians use the army revolver in the hunt, some the carbine or Winchester rifle, while others use the bow.
A warrior snatches an arrow from his quiver over the shoulder, springs the bow with a magic hand, and in an instant buries the arrow to the feathers in the flesh of the buffalo.
The arrows are marked in colors near the feathers, so that each can be recognized, and the game claimed by the owner of the one which, by its position, indicates that death was caused. 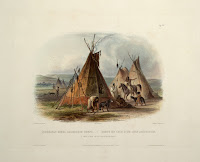