Salve,
I used to live on the Great Plains, and I love the sight of the bison herd in a distance along with antelopes and coyotes - :) .
I buy commercially raised bison meat, and enjoy many a bison stew or grilled chop.
I have decided to publish some accounts of the historic bison, and I will start with the one provided by our taxidermist Joseph H. Batty.

Joe Batty, in How to Hunt and Trap, spent some time on describing the American Bison (he calls it buffalo) and methods of hunting the animal. Horses figure high in this description, the native hunters too. Batty was writing at the end of the era, as the once vast bison herds had been hunted into oblivion during the 1870s and 1880s. It was saved from extinction by the efforts of the American conservationists, scientists and many dedicated people.
The description includes a 1709 report by John Lawson, which is a very early English testimony about the bison. In the future I shall provide more historical accounts on bison, its hunting and the role of horses.

The buffalo with his humped back, shaggy head, intent eye, and giant proportions, is a formidable creature to look at, but his appearance does not represent his nature, as he never attacks except when wounded and in self- defense. He has been hunted for two centuries, and for the past twenty years mercilessly and wantonly. The cows have been slaughtered until they are far out-numbered by the bulls, and the time is not far distant when the buffalo will exist in tradition only.
Buffalo are now found on the great plains between the Missouri river and the Rocky Mountains, north into the British Provinces, and south into the Southern United States. Their resting ground is the mountainous and hilly country on the upper Missouri river, where large herds and scattering bands escape the merciless fire of the Indians. The buffalo once ranged as far East as the Carolinas, as may be seen by the following report of John Lawson, Surveyor General of North Carolina, in 1709 :
" The buffalo is a wild beast of America, which has a bunch on his back, as the cattle of St. Lawrence are said to have. He seldom appears amongst the English inhabitants, his chief haunt being in the land of Mississipi*, which is for the most part a plain country; yet I have known some killed on the hilly part of Cape Fair river, they passing the ledges of vast mountains from the said Mississipi, before they came near us. I have eaten of their meat, but do not think it so good as our own beef; yet the younger calves are cry'd up for excellent food, as very likely they may be. It is conjectured that these buffalos, mixed in breed with our tame cattle, would much better the breed for largeness and milk, which seems very probable. Of the wild bull's skin, buff is made. The Indians cut the skins for the ease of their transportation, and make beds to lie on. They spin the hair into garters, girdles, sashes, and the like, it being long and curled, and often a chestnut or red color. These monsters are found to weigh (as I am informed by a traveler of credit) from 1,6oo to 2,400 weight." 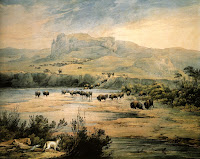 In the distance the buffalo looks black, and their huge forms, when viewed sideways, appear immensely large. Their heads are carried low, and when retreating, their bodies appear small, but as soon as they turn broadside, and stop to look back, they suddenly loom up into gigantic proportions, often tempting the hunter to shoot when far out of range. The buffalo's endurance is so great that he will use up two ponies on a long moderate chase. They fear a mounted hunter more than any other object, and always retreat when seeing one, unless at a great distance. Any unusual object attracts the attention of stragglers, and they will often advance within long rifle range of a covered wagon. They exhibit great curiosity at times, and solitary old bulls can sometimes be " flagged " like antelope. The habits of the buffalo are varied, and become more so each year. Every season's hunt makes them more suspicious, and their range more contracted. They winter much further north than formerly, and the Wolfers often kill them in the dead of Winter nearly to the forty-ninth parallel. In this northern country they often perish from cold and hunger, and get snowed in, in the gullies of the mountains where they have gone to get out of the piercing cold winds and driving snow. I have found their skeletons in large numbers, lying so closely as to touch each other in several passes in the northern Rocky Mountains. Were it not for the hills of the prairie kept bare by the driving winds, and the scant browsing in the bottoms, the buffalo would be compelled to winter further south, or perish. During the Summer they select the most fertile localities, and if unmolested, feed quietly in scattering herds ; often standing side by side, brushing away the flies, or lying peacefully in the shade, like domestic cattle.

When feeding and migrating, the rear portion of a herd continually crowd those ahead, and push forward, snatching the tufts of grass as they pass; when their hunger is appeased, they fall back, and are succeeded by others, who in their turn jostle and push until all pause to rest. The country over which a large herd has passed is left entirely bare, with the exception of the numberless "chips." When a band comes suddenly upon a hunter, they crowd to the right and left, forcing open a V shaped space, which rapidly grows larger until the buffalo are passing about fifty yards distant on each side ; they then close behind him in the same manner, leaving him in the centre of a diamond-shaped space.

The run of the buffalo is a slow, heavy gallop, or lope, which is greatly increased in speed when they are pursued. A continual crowding and jostling is characteristic of a retreating band, many striving to force their way into the centre for safety ; the old bulls run scatteringly on the outside of the herd, and will sometimes stop, rub their noses in the dust, scrape the ground with the fore feet, watch the hunter a moment, then gallop off again. Th« calves run by the side of the cows, and often under them; they keep pace with the herd without difficulty, and it seems wonderful that they are not trampled to death.

Buffalos run down hill without slacking their headlong speed, which the pursuing hunter is unable to do, as his pony has to travel at a slower pace ; when ascending, the buffalo travel much more slowly, and the pony, can then gain on them rapidly. The cows are the fastest runners, and it requires a nimble pony and a good rider to overtake them. Herds should be surprised, if possible; the hunter can then spur his pony into the band at the beginning; should they have the start, follow leisurely until reaching an ascent, then urge the pony to his utmost speed, and make a spurt, to and among them, or the chase will be a fruitless one. In September their flesh is at its best and the weather pleasant for camping, but their skins are not of much value until November, from which time till January they improve in quality.