Salve,
time has come to revisit the Old West - I miss it badly, don't you ?
so archive.org gives us access to hundreds of thousands of books, and my favorites are the XIX century books, full of life and stories. 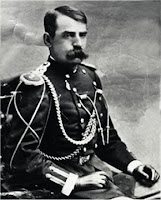 In this instance let us turn to a bronco's breaking (there was little gentling as you will read shortly) as described by an American officer John G. Bourke then serving with the 3rd US Cavalry in the Arizona and New Mexico Territory during the Apache wars. - the book is titled "On the Border with Crook" - and it is freely available for reading or downloading here.

At first, our author introduces Fort Grant to us:


''There would be very little use in attempting to describe Old Fort Grant, Arizona, partly because there was really no fort to describe, and partly because few of my readers would be sufficiently interested in the matter to follow me to the end. It was, as I have already said, recognized from the tide-waters of the Hudson to those of the Columbia as the most thoroughly God forsaken post of all those supposed to be included in the annual Congressional appropriations. Beauty of situation or of construction it had none ; its site was the supposed junction of the sand-bed of the Aravaypa with the sand-bed of the San Pedro, which complacently figured on the topographical charts of the time as creek and river respectively, but generally were dry as a lime-burner's hat excepting during the "rainy season." Let the reader figure to himself a rectangle whose four sides were the row of officers' "quarters,' the adjutant's office, post bakery, and guard house, the commissary and quartermaster's storehouses, and the men's quarters and sutler's store, and the "plan," if there was any "plan," can be at once understood. Back of the quartermaster's and commissary storehouses, some little distance, were the blacksmith's forge, the butcher's “corral,” and the cavalry stables,"

then he move onto the bronco's breaking:
[..] while in the rear of the men's quarters, on the banks of the San Pedro, and not far from the traces of the ruins of a prehistoric village or pueblo of stone, was the loose, sandy spot upon which the bucking "bronco" horses were broken to the saddle. Such squealing and struggling and biting and kicking, and rolling in the dust and getting up again, only to introduce some entirely original combination of a hop, skip, and jump, and a double back somersault, never could be seen outside of a herd of California "broncos." The animal was first thrown, blind folded, and then the bridle and saddle were put on, the latter girthed so tightly that the horse's eyes would start from their sockets. Then, armed with a pair of spurs of the diameter of a soup-plate and a mesquite club big enough to fell an ox, the Mexican " vaquero " would get into the saddle, the blinds would be cast off, and the circus begin.

There would be one moment of sweet doubt as to what the "bronco " was going to do, and now and then there would be aroused expectancy that a really mild- mannered steed had been sent to the post by some mistake of the quartermaster's department. But this doubt never lasted very long ; the genuine " bronco " can always be known from the spurious one by the fact that when he makes up his mind to " buck " he sets out upon his work without delay, and with a vim that means business. If there were many horses arriving in a " bunch/' there would be lots of fun and no little danger and excitement. The men would mount, and amid the encouraging comments of the on-lookers begin the task of subjugation. The bronco, as I have said, or should have said, nearly always looked around and up at his rider with an expression of countenance that was really benignant, and then he would roach his back, get his four feet bunched together, and await developments. These always came in a way productive of the best results ; if the rider foolishly listened to the suggestions of his critics, he would almost always mistake this temporary paroxysm of docility for fear or lack of spirit. And then would come the counsel, inspired by the Evil One himself : “Arrah, thin, shtick yer sphurs int' him, Moriarty.” This was just the kind of advice that best suited the " bronco's " feelings, because no sooner would the rowels strike his flanks than the air would seem to be filled with a mass of mane and tail rapidly revolving, and of hoofs flying out in defiance of all the laws of gravity, while a descendant of the kings of Ireland, describing a parabolic orbit through space, would shoot like a meteor into the sand, and plough it up with his chin and the usual elocutionary effects to be looked for under such circumstances.
Yes, those were happy, happy days - for the " broncos" and the by-standers.''
**
and some more on the pleasures of living quarters at this Army installation:
''There were three kinds of quarters at Old Camp Grant, and he who was reckless enough to make a choice of one passed the rest of his existence while at the post in growling at the better luck of the comrades who had selected either one of the others. There was the adobe house, built originally for the kitchens of the post at the date of its first establishment, some time in 1857 ; there were the "jacal" sheds, built of upright logs, chinked with mud and roofed with smaller branches and more mud; and the tents, long since "condemned" and forgotten by the quartermaster to whom they had originally been invoiced. Each and all of these examples of the Renaissance style of architecture, as it found expression in the valley of the Gila, was provided with a "ramada" in front, which, at a small expenditure of labor in erecting a few additional upright saplings and cross-pieces, and a covering of cotton wood foliage, secured a modicum of shelter from the fierce shafts of a sun which shone not to warm and enlighten, but to enervate and kill.''

more to come from this book in the future
enjoy