Salve,
today is All Saints' Day - one of the most important  days in Polish religious and family calendar - I wrote about  the day after All Saints Day or 'Zaduszki'   last year. May your ancestors rest in peace and do light a candle. Pacem aeternam

Meantime, back to Herr Kurz and his journal:
It was April 1848 and our artist left the civilised comforts of St.Louis to go upriver,  because:
I longed to study Indians and wild animals.

choosing as hus destination a newer settlement up the river
I decided to go to St. Joseph on the Missouri. There I should
certainly find Indians enough : The region in the midst of which the
town was situated was open Indian country, belonging to the Kicka-
poo, and the town itself was a rendezvous for fur traders of Missouri and
Nebraska, just as Independence was a center for Santa Fe fur traders
and, at an earlier date, St. Louis for the entire furtrading region of the West.

where he arrived on April 18:
St. Joseph, once the trading post of Joseph Robidoux, is situated
at the foot of the Black Snake Hills on the left bank of the Missouri.
Though the town was founded only six years ago there are evidences
already of a rapidly expanding and flourishing city. In spite of the
fact that there are many new buildings, both of wood and of brick,
houses, either for homes or for business purposes, are hard to get.
Upon my arrival the principal streets were much enlivened by fur
traders and immigrants on their way to regions, as yet little known,
in Oregon and California. The rich gold mines were not then dis-
covered. Only the most daring fur traders had penetrated into that
far country and, following in their wake, a rough, lawless set of
adventurers, eager for gain and best pleased with what the strong
hand won, traveled the same trail in armed bands with pack mules
and covered wagons.

Hence there, at St. Joseph, he became introduced to the American Fur Trade and  finally met the fur traders and their 'field employees' - trappers aka mountainmen , before meeting the Indians:

Throughout the entire summer bourgeois or the heads of firms,
clerks, and other engagees or employees of the different fur companies
crowded the streets and public houses of the town. St. Joseph is for
them now what St.Louis was earlier — their rendezvous. Here all
staple commodities are supplied from St. Louis, but horses are
bought up for the purpose of selling them to the Indians on the upper
Missouri and on the Platte or Nebraska. There packs of buffalo hides
(as many as 10 packs at a time) are reshipped on the steamers, the
empty mackinaw boats sold and their crews discharged.
Those people are called Mountaineers,* a name associated with many
dangerous adventures, much painful endurance, but also with much ro-
mance and pleasure. The Mountaineers like best to dress themselves
in clothes made of tanned deerskin, embroidered and fringed. One
recognizes them, therefore, at sight ; knows who they are and whence
they come. They are stared at as though they were bears. Not
infrequently they have no other apparel then their leather costume,
for after a long stay any other clothing would be entirely worn out.

It seldom happens, however, that these engagees have ever seen
the Rocky Mountains, much less braved their dangers. But, on the
other hand, they are compelled to work very hard in cold, rain, and
storm. The Canadian engagees, guides in the Canadian woods,
'mangeurs de lard,' ** are known to have swaggered through the most
breakneck dangers in which they were inclined to play an important
role. However, they cannot reckon courage as the most striking of
their fine qualities.


They have far too much regard for their own safety to fight for an
employer about whom they constantly complain, because he
demands work done in return for his money. Later on, when I
reached the upper Missouri, I observed a great many of
these swaggerers. In that distant region, beyond the pale of law, I
have often seen them cry out in alarm at the mere sight of a stranger
in the distance and take to flight — even throwing aside their weapons
or implements as if those instruments of defense did not belong to
them. They are, on the other hand, the most good-tempered people
and especially good patrons of the innkeepers if they have any part
of their wages left when they reach home. Few of them are provi-
dent enough to put aside any part of their earnings to buy house
and land or to settle down to their earlier employment.

We already know he is drawing a lot, so this time Herr Kurz was working with wild animals of the region:
American Black Bear
A black bear, captured and enchained, gave me the welcome oppor-
tunity to study his kind. He was absolutely black ; not even a trace
of gray or brown, even on his upper lip.

American Badger
To-day an Iowa farmer brought into the town a live
badger, in a piece of hollow tree, to exhibit him for sale. I bought
the animal for $4 and kept him about a month in my bedroom, pro-
viding him daily with meat, bread, and fresh fruit. He was quite
well-behaved toward me but during the night scratched out great
pieces of plastering at the foot of my bedroom walls. Now and then
I allowed him to run in the outlying fields to get some exercise and
to amuse me with his way of digging in. He could not run any
faster than I usually walked. If I went along behind him he moved
straight ahead; if I walked beside him then he tried to escape in
the opposite direction. In less than 10 minutes he would burrow
his whole length into the rich, loose soil and then I had to pull him
out by his tail. When he was set upon by dogs it was a matter of no
importance to him so long as they made a frontal attack; but as he
was not able to turn his head, on account of his stiff, thick neck, the
instant he was attacked from the side he was lost. He was skilled
in the art of biting ; he had a queer sort of bark somewhat like that
of a fox. After I made repeated drawings of him I was obliged to
have him killed ; the damage he did was so far in excess of his good
uses. I had his pelt tanned, in order to use it for a hunting bag, but


it proved to be too greasy to be of service. However, I brought it
home with me.

enjoy :)
Original spelling in the 'Italicised text'  of the Journal. Drawings by Remington, paintings by Charles Deas, George Catlin and Alfred Jacob Miller - all public domain. 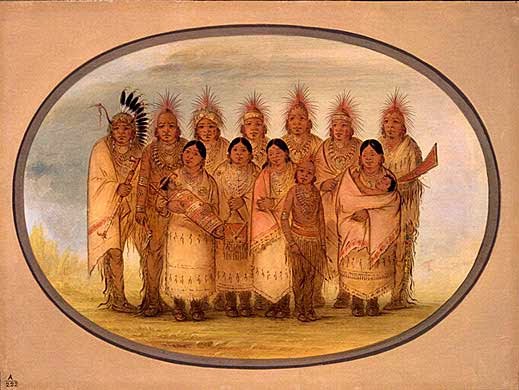 Note that the Platte Territory was purchased from the native tribes by the US government in 1836 -  being part of the so called Missouri Territory, officially acquired in 1812. Fur trader  Robidoux secured a piece of land within the Ioway tribe lands of the Blacksnake Hills country. Kurz claims in the Journal that the land around St. Joseph  belonged to the Kickapoo, who were newcomers to the region, unlike the native Ioways etc - perhaps this needs more investigating :)
ps
*
Mountainmen or trappers - fine library -  primary sources on and by the subject 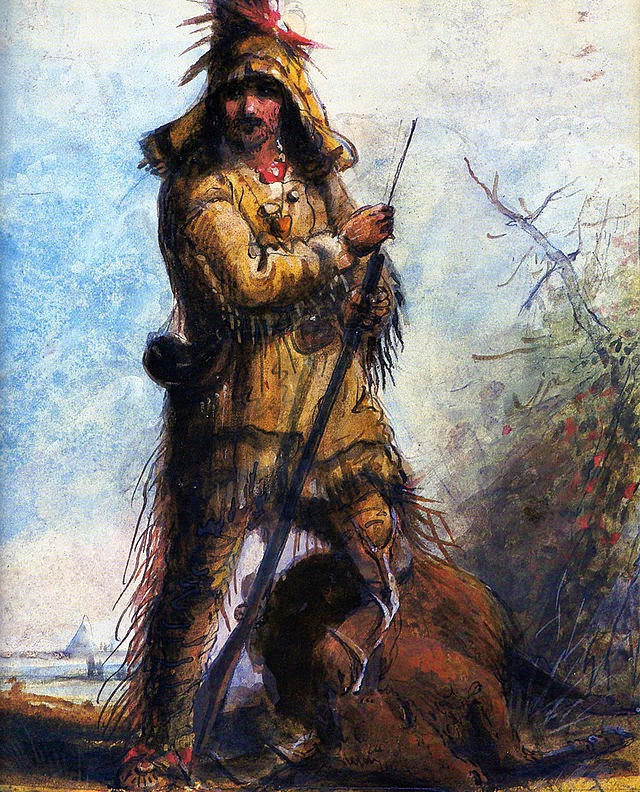