Napoleonic bridles and horse soldiers as seen by François Gérard

Salve,
a day after the great feast of Thanksgiving calls for something special in the history of horse art and war horse, so perhaps the grand work by master François Gérard who witnessed the Age of Napoleon would give us this 'grandeur.' (notwithstanding the fact that the Emperor was one of the great destroyers of war horses in history).
The French victory at Austerlitz was painted by many an artist, but the rendering of this moment of cavalry glorious return from their victorious charge as depicted by monsieur Gerard allows us to do a little viewing of the period tack and horse, and horse soldiers of the Imperial Guard,  Their their famous charge that 'let the ladies of Saint Petersburg weep ' left for the other artists to paint.
Naturally the Emperor of the French first :) 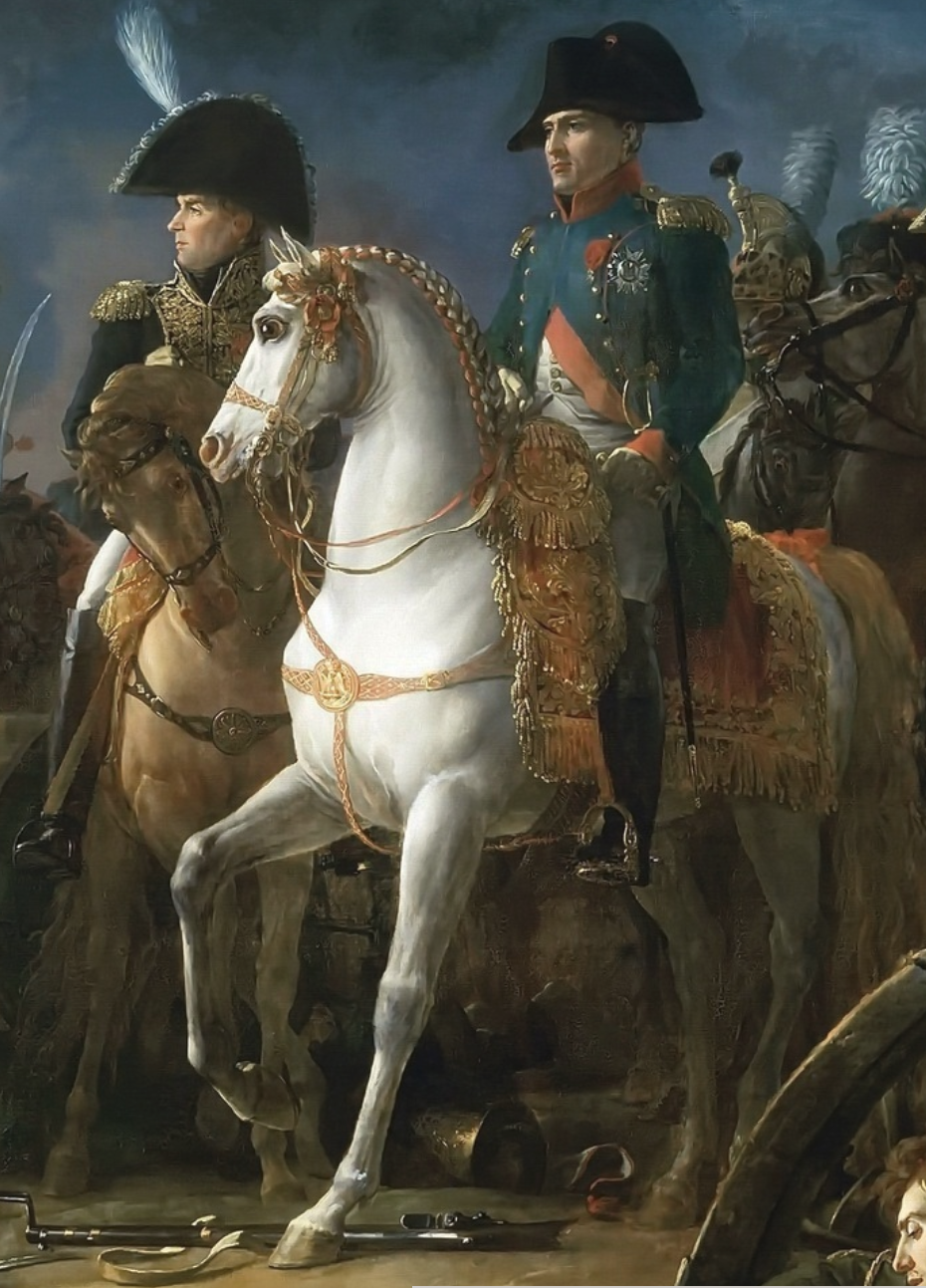 In the center of the canvass we see  the commander of the famous charge, Napoleon's  ADC general Jean Rapp reporting the victory to the Emperor and his staff (nota bene Marechal Jean-Baptiste Bessieres also charged in this cavalry action)
Napoleon on his splendid stallion:

heroic Jean Rapp is a bit wounded, hatless and rides a splendid grey that could make many a stable proud 
“ Gerard, the celebrated painter, was charged by the Emperor Napoleon I.


to paint the battle of Austerlitz. In his composition of that great feat of arms,


gain of the battle. Every thing was prepared on the canvass, and there only


remained to place Rapp on horseback, but Gerard could not find a charger


which suited his ideas.


The Emperor had placed at his disposal, not only all the horses of his own stables,


but ordered that those of all the cavalry regiments should be open to him.


The animals were made to gallop, rear, and perform all kinds of movements, but none of them pleased the painter, and Rapp still remained unmounted.


One day while walking along the Boulevard, the painter, in passing


before a toy-shop, uttered an exclamation of delight on observing a small


pasteboard horse, painted grey and with a black head, which, from its position looked as if it was about to leap out of the window.


“Ah!' cried Gerard, 'that is the horse for Rapp;' and entering , he asked the price for it – 'Twenty -five sous,' was the replay; and the artist, paying the money, carried off the horse under his arm.


It is this animal which, it is said, figures, in the famous picture of the Museum at


Versaillers, carrying Rapp to the emperor, the General, in his haste having lost his hat.
(printed 'Dwight's Journal of Music:' Boston 1861, p 175)
General Rapp described this action in his memoirs - can be read at archive library, as usual :) 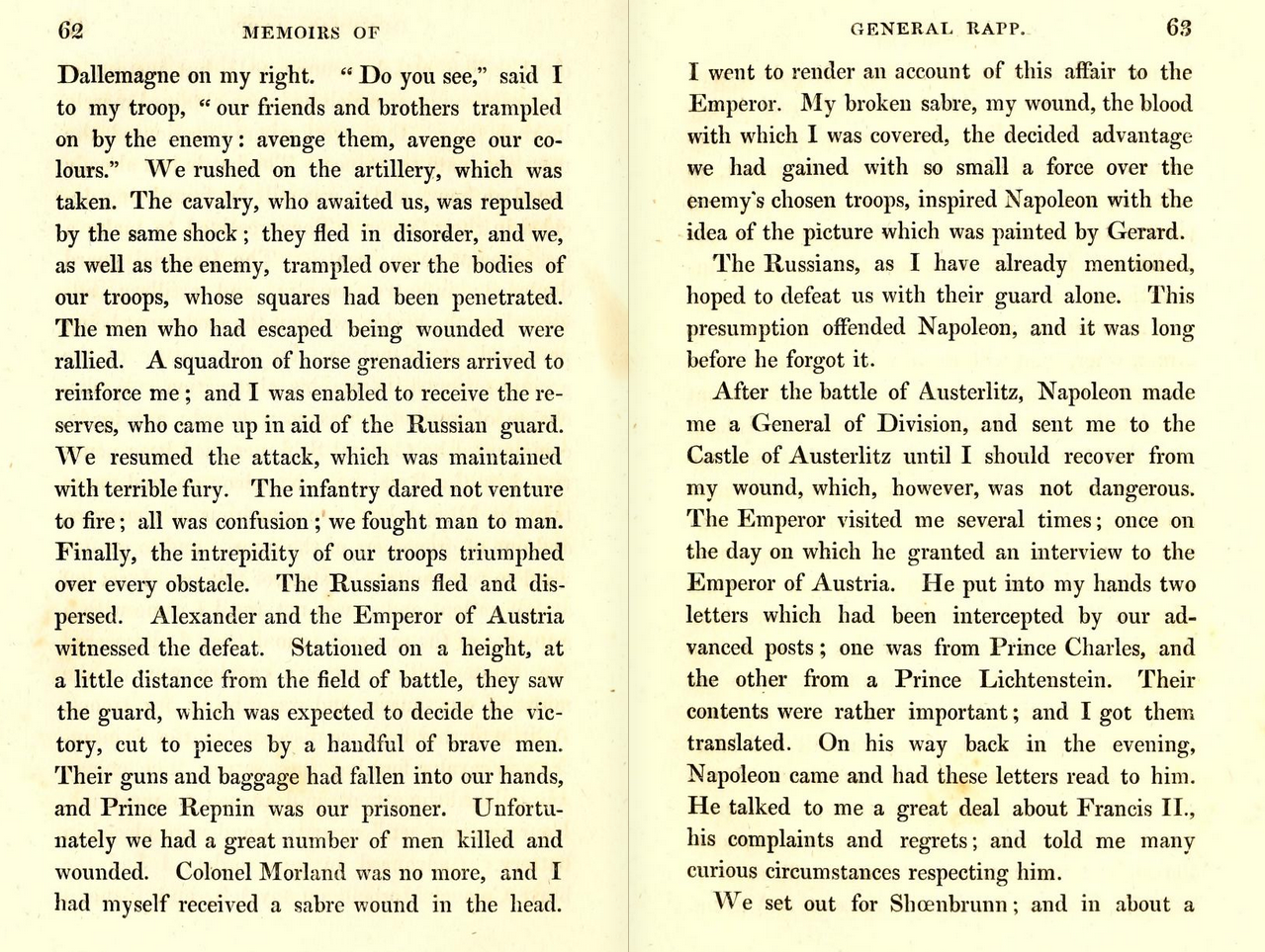 Chasseur a cheval -  including the chasseur who mortally wounded still brought the captured flag to his commander - (The Memoirs of Baron de Marbot, vol I p. 199) 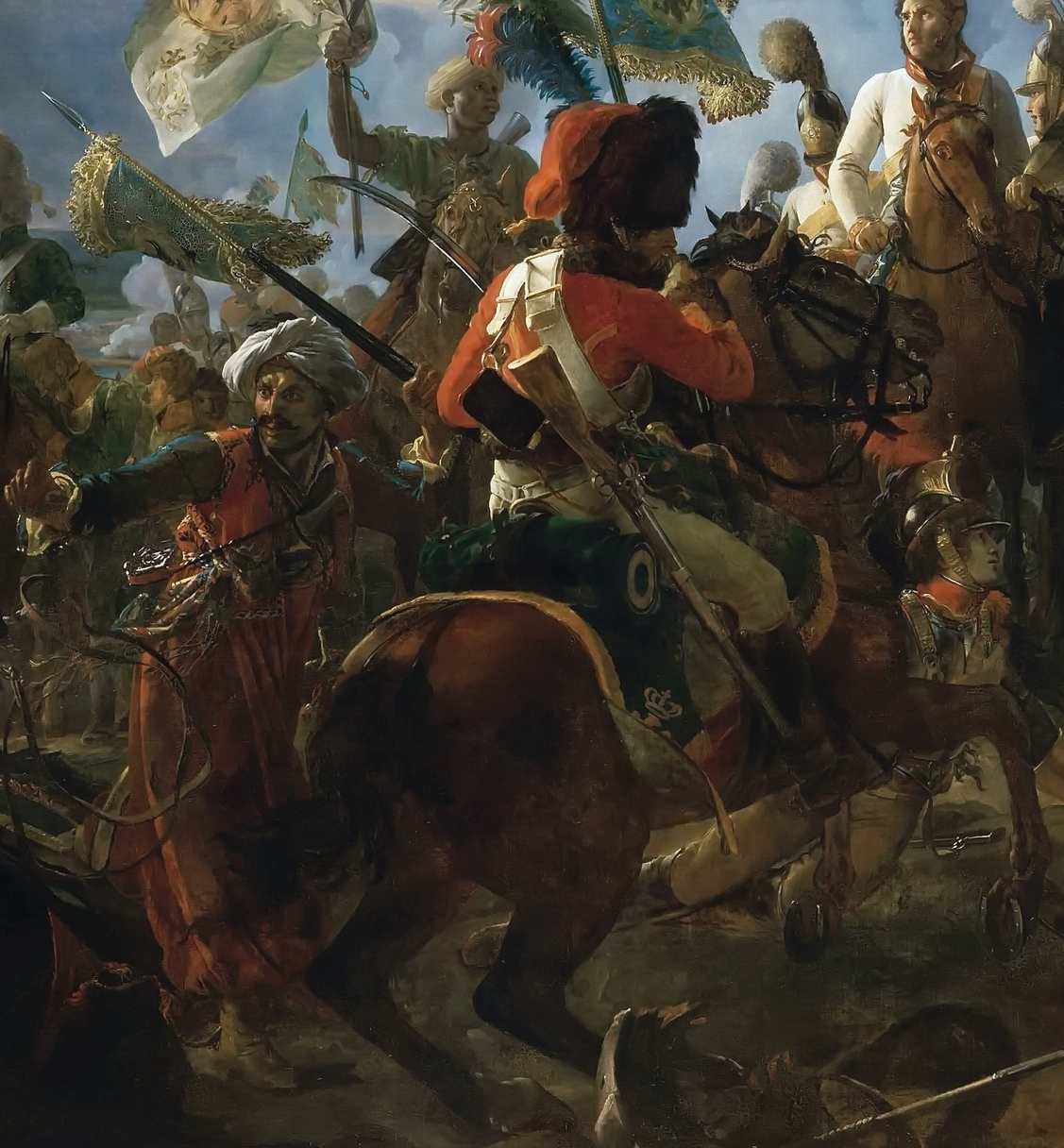 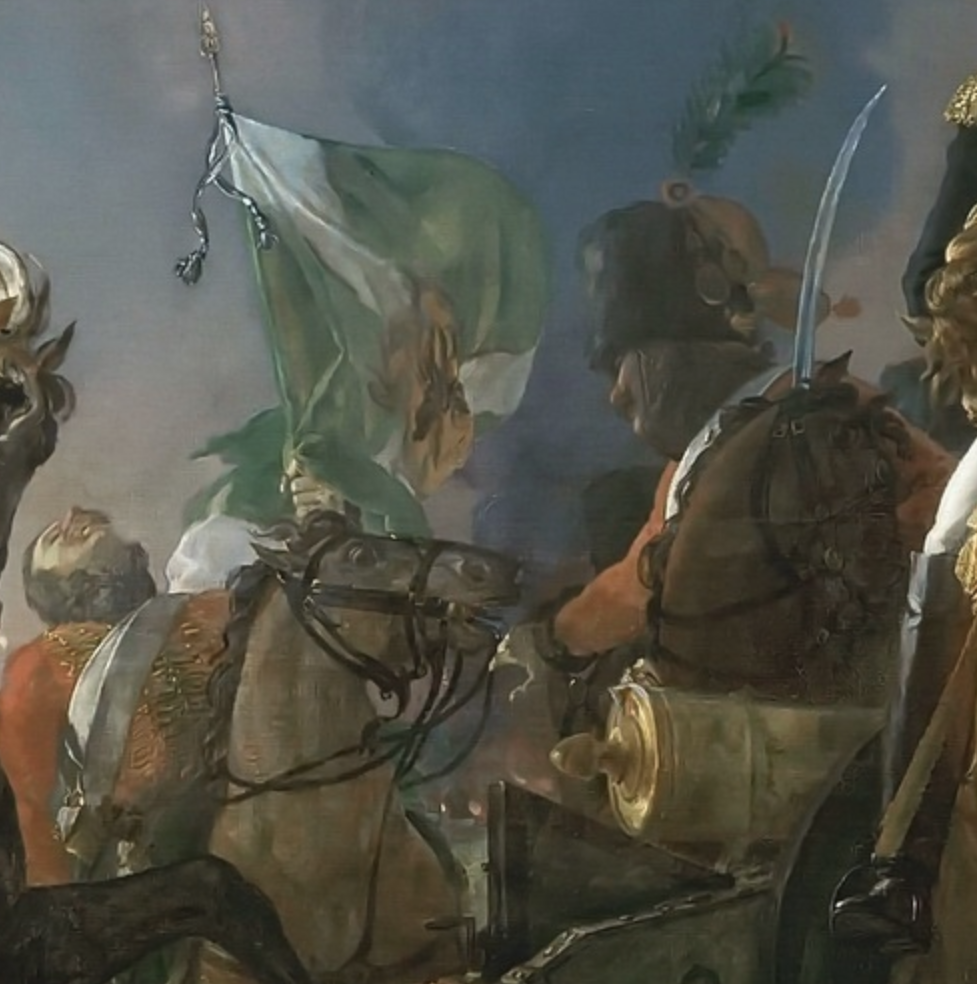 Grenadiers a cheval -  famous bearskins - perhaps a little about their horse tack - their horse tack consisted of a natural leather saddle  with a white leather seat (over a blue saddle cloth with  wide stripe of 'gold' lace).  Gold grenades were embroidered in the rear corners of the the saddle cloth. The bridle with reins, breastplate, and crupper  were of black leather with the metal buckles et al of brass where required. Cinch was of a grey cloth. Pistol holders were of brown leather, blackened iron stirrups hung on the Hungarian leather straps.  The horse head harness consisted of the cavalry bridle (curb-bit of steel with a brass boss stamped with a grenade and snaffle etc) and double reins and scarlet rosettes and ribbons.

enjoy
ps
Patrice Courcelle painted several Osprey's titles where very detailed plates with uniforms, horse tack etc can be studied and enjoyed along with the text.  Two plates in the 'Mounted Chasseurs of the Guard' depict  the Rapp & Guard's charge at Austerlitz in monsier Courcelle' fine style.
Ps'
2014 reenactment - at  Slavkov u Brna, in Czech Republic, of course.

Thanks for giving such a great information about horses
Horse bridels looks uniqe and beautiful on your horse
I'm very crazy about horses. and if you really want to enjoy your riding than you should wear.
keep doing well.
horse bridles