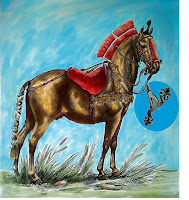 Salve,
Since I have not done any writing on the Scythians for a while, I am going to correct this a bit as it reflects my current reading and drawing.

As it may be rather evident from this blog  the European or more precise Eurasian horsepeople of the late Bronze Age and Iron Age are one my fascinations and a reason for  this neverending  desire to read  and find out more about them.
In order to study them one needs to read Russian language publications  and German ones (I do not read German at the level that reading more than a picture caption is Herculean task) , and last 15 years the English language ones have been slowly becoming available, mostly because Russian language scholars have started to write in English. I have to say that in the  early XX the subject was studied in Europe and American but the Soviet Union and Communist China  nightmare across most of the Europe and Asia stopped contacts between the scholars and impeded research on the ancient Eurasian peoples.  War in Afghanistan - from Soviet invasion through civil war and Taliban rule to present Euro-American occupation - prevented research in that very important centre of ancient civilization of the Eurasian people, where perhaps one of the centers of the most ancient civilization originated - Bactria-Margiana Complex (BMC), and from BMC civilization area -Central Asia- the bronze tools, horses etc might have been spread by the Eurasian peoples to China, giving raise to Shang Chinese empire. In context of the XX century Western scholars working on the ancient Eurasian peoples we  should never forget the names of Mikhail Ivanovich Rostovtzeff, Tadeusz Sulimirski, Otto Meanchen-Helfen, or Rene Grousset - books they wrote are still great  journeys into the Eurasian horsepeoples past.

I have been reading several books on the Scythian-Saka horse tack and  riders - most of them in Russian (but there are some very interesting English ones too, written by Russian, European and American researchers  eg  this website dedicated tot he study of Eurasian nomads  under the aegis of Jeannine Davis-Kimball is a great research net library www.csen.org/Articles_Reivews/Bibliography.html  - you can download there this very important book  csen.org/Pubs_Sales_Reviews/Nomads/Nomad-188579-00-2.pdf   )  or in English  where they are evaluating Russian (and combined/joint Russian, Ukrainian and Euro-American research in the Eurasian plains and Caucasus foothills of Russia.
Generally fascinating topic, especially the big 'fight' between scholars regarding the time of horse's domestication in Eurasian plains (Anthony/Brown et al - their wonderful site is here   http://users.hartwick.edu/anthonyd/harnessing%20horsepower.html -  versus Marsha Levine et al, a very prolific researcher eg her article on Botai  http://faculty.ksu.edu.sa/archaeology/Publications/Neolithic/Botai%20and%20the%20Origins%20of%20Horse%20Domestication.pdf - here one of the projects this scholar  is involved the chariot horse in Shang Bronze Age Chine  http://www.arch.cam.ac.uk/~ml12/ChinPalaeoWebsite/introduction.htm )
Posted by Dario T. W. at Sunday, March 06, 2011

Thanks a lot for the materials!
I have a printout of Nomads of the Eurasian Steppes, but I haven't heard of the others before.

Hey Janku,
glad to show you the way, I hope these readings will inspire you to do some great art -as the Lakota say: hanta yo - :)

Many thanks for the entry ! Some interesting reading indeed..

This horse is really a beauty! Congrats.