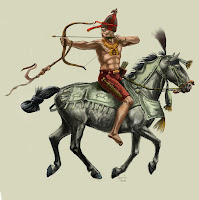 Salve,
I have been testing new brushes and 'upped' GIMP thanks to splendid work of monsieur David Revoy, one excellent French artist and open-source software developer, - his great website  http://www.davidrevoy.com/portfolio.html

Nowruz  or New Year - of the almost three thousand year old Iranian tradition - is approaching fast March 20-24 (even in Uiguristan or Tarim Basin, China) and my 'compadre' Dr Kaveh Farrokh, whose new book on the Qajar (Kadjar) and later Iranian military history  from Osprey will come out this summer,  has a very nice article on his website about the Nowruz tradition
http://www.kavehfarrokh.com/news/professor-shapur-shahbazi-nowruz-in-the-islamic-era/

Happy Nowruz to all my Iranian, Kurdish and Turkish (from Europe to Tarim Basin) readers, and to all who would like to celebrate this ancient holiday!
As I am scratching my shaved head with my Wacom 'brush-pen'  I think I may still 'paint' something for the Nowruz - perhaps shahanshah Dārayavahuš and his neighing Nissean stallion :)
...
ps
the sketch above is a pure fantasy - but does have some elements of the Iranian (Median) horse tack from around VII century BC, Indo-Scythian attire from around I century AD, and Sarmatian and Parthian  short sword III-I century BC.
Posted by Dario T. W. at Saturday, March 19, 2011

*sigh* IndoScythians are another subject I wish I knew more about. So much to learn and so little time.