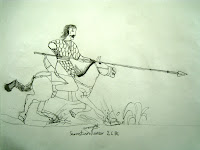 Salve,
we, Polish people, used to call ourselves 'Sarmaci' (the Sarmatians) after the dragon-standard wielding equestrians who formed  tribal confederacies on the Eurasian steppe en.wikipedia.org/wiki/Sarmatians  (fine book on the Sarmatian warriors is messer Mielczarek's  The Sarmatians from Osprey), and in Roman-influenced Europe fought the Imperial Rome and her allies. They might have  given to the  Western Europe many of later equestrian culture elements, amongst others,  the basis for the Arthurian legends (famous book From Scythia to Camelot) eg  magtudin.org/Arthur%20part%201.htm and the mounted, lance wielding knight (Sasanid Persian learned from them too) sarmatian-gold
In the late Medieval Poland, then emerging powerful state in personal union with Duchy of Lithuania,  the idea of the Polish nation (i.e. nobles and gentry) descending from the Sarmatians was adopted wholeheartedly  and consequently elaborated and woven into our cultural and socio-political fabric, including our own model of democracy and election of kings (sadly they did not follow with the arts similar to Sarmatians, whose work was full of mythical creatures, eagles, horses etc  )
Anyone who has had the opportunity to peruse the book Land of the Winged Horsemen -can be had from Amazon.com  amazon.com/Land-Winged-Horsemen-Poland-1572-1764/dp/0300079184   - can see how serious our Polish nobles were in their pursuit of that mythological, cultural and to large extend a political theme theme.
Generally speaking we Slavic peoples had plenty of contacts with the Sarmatians, reflected in our pagan religious traditions and folk customs, vocabulary, love of horses and color red, and our Polish heraldry reflects the tamgas (property marks) used by the Sarmatians on their mounts and weapons etc, while the very Serbian and Croats (divided now by religion, alphabet, and by the  tragic 1990s wars) are thought to have originated as a direct mixture of Sarmatian warriors (both male and female) and Slavic tribal people.

The object shown above is one of the famous Kosika vessels, also shown here- www.blogger.com/post-create.g?blogID=7466337662455429678  the fragments of several silver vessels from the south Russian steppe in the Astrakhan region have been found and ever since  have given us plenty of fine images of mounted Sarmatian warriors. The second image comes from another Kosika vessel and  my 9 years old son Jasio's drawing comes from that other Kosika vessel showing a armored lancer.
Reading - some sugestions
A good book to read on the Sarmatians is the work of Tadeusz Sulimirski titled 'The Sarmatians' , on the Roman era Bosporan Kingdom  that Sarmatians ruled 'The Army of the Bosporan Kingdom' by already mentioned Polish scholar Mariusz Mielczarek  and much older chapter in the Cambridge Ancient History by Rostovtzeff ,  article about migrations by Vinogradov  http://www.pontos.dk/publications/books/bss-1-files/BSS1_18_Vinogradov.pdf , on Sarmatian art - the Golden Deer of Eurasia, and also  a part of a book on European Nomads, a joint work by various scholars, already linked several posts ago in this entry dariocaballeros.blogspot.com/2011/03/scythian-horse-sketch.html

Today's musings  shall not be the end of Sarmatian thread, I hope to write and illustrate  many more entries  devoted to the Sarmatian warriors (both female and male) and their equestrianism.
Posted by Dario T. W. at Monday, March 14, 2011