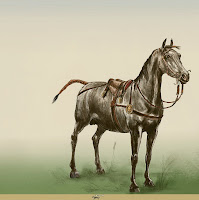 my sketches of the month of March seem to continue in the theme of the Eurasian nomads of old, I hope to your contentment as well. I have been reading various books on the early horse ridding and steppe horse-human interactions, and naturally I am drawn to the subject. When I'll have finished these books, then I will discuss some of the articles here - one has an an interesting ( two archaeologists and veterinarian co-authored it) critique of Saka/Scythian early saddles, and I must share my thoughts here, for I strongly disagree on what the conclusions they made. Please note that I am a strong partisan of Dr Anthony argument for early horse domestication on the Eurasian steppe, and I would like to critique some of the ideas of the opposing school - note my entry on this subject  here horse domestication dilema  But this will come some time this Spring, I hope.
Let us go back to the subject of ancient saddle and bit - well, our ancestors the Eurasian nomads used mostly snaffle bit - we do not know whether they also used a jakima/hackamore,  but they might have done that. But instead of snaffle rings they used 'psalia'- bronze, iron or wooden cheekpieces (solid round  or solid elongated pieces) that usually had three holes in it, one in the middle for the snaffle ends to pass, so reins will be attached to these ends, and two on both sides of the middle hole, where cheekstraps were attached, thus connecting the bit with the bridle.

The briddles  found in Pazyryk Kurgans in the Altai Mountains(Russia), in other kurgans of the Altai's Ukok Plateau in Russia, in the Tarim Basin (Uiguristan -China), on th Persian Apadana frieze, have not throatlatch, but a strap that runs from the middle of the cheekstrap under the lower part of mandible/jaw to the other side of the horse head.

The saddle was made of tho cushions (wool or horsehair stuffed leather 'rolls') held with wooden spacers along the horse's spine, with decorative leather or wooden frontelets/archers, thus creating a pommel and cantle-like part of the saddle( it may be worth noting that the current Argentine gaucho saddles have a type that is so very similar to this ancient nomad saddle). 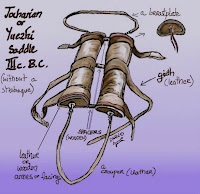 Over the front, middle, and rear part of the cushions run leather straps, the middle one usually attached to the girth/cinch, but it could have been the front one two, as shown in some steppe art. The leather breastplate was attached to the girth, and secured with another leather strap coming across the withers, and usually the point of attachment of the breastplate and 'withers' strap was  covered with an adornment, later a metal disc, known by its Roman name 'Phalera.' The leather crouper was attached to the saddle's rear, the cantle, and at first had  adornments, but later also acquired its share of splendid artwork. 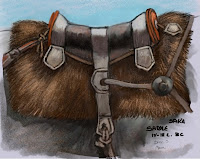 Tails were usually wrapped with leather and felt (felt was the textile of choice with these peoples) and forelock tied with some colorful ribbon, similar mystically or spiritually charged traits can be found in the horsemanship of the American Indians of the Great Plains. Ears were often notched (Pazyryk and other finds attest to this), perhaps a sign of ownership, and the  Sarmatians branded their horses with marks of ownership or tamgas. Saddles were then covered with a 'shabraque,' usually made out of felt, and the most famous and best preserved were found in the Altai - like in this drawing of mine  http://dariocaballeros.blogspot.com/2011/03/scythian-horse-sketch.html
or could have a saddle pad underneath  the saddle like in this  drawing of mine http://dariocaballeros.blogspot.com/2009/09/nomad-sketch-update.html
Well, it is getting late so  I shall finish for now, but rest assured that subject of ancient Eurasian saddlery will be continued in more installments...
*
My sketch is a ball pen drawing, with an acrylic wash over it, then GIMP and MyPaint.
-------------------------
Great German equine sculptor http://www.koblischek-art.net/englisch/index.htm
Posted by Dario T. W. at Tuesday, March 29, 2011

Dariusz,
Do you believe the Pazyryk people, the Tarim people, and the Yuezhi, were culturally related. I think all three were part of the Yuezhi confederation. Thank you.
A.J. Campbell, aka steppe.warrior@gmail.com

I like ancient times horse saddles. horse saddle should be for the comfort of the horse and the safety of the rider.

This saddle is extremely similar to the "basto porteño" or the "basto entrerriano", used today in Argentina

Dear Cecconi, thanks for commenting - I also see a resemblance - I have always thought that the gaucho tack and the ancient Eurasian Scythian/Saka etc saddles have lots of in common.