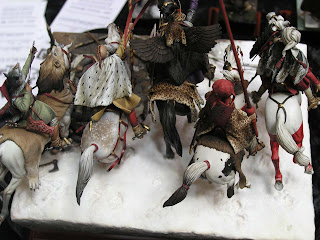 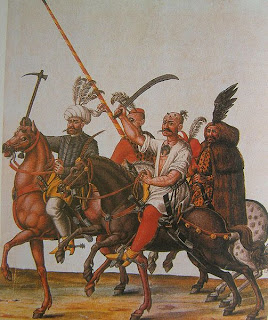 Note that  the turbaned (most likely the helmet underneath the turban) commander is wearing an 'anima' laminated  cuirass, coat-of-mail under the cuirass protecting his arms and maybe his hips, while at his side there is a sabre, underneath his left thigh a broadsword (pallasch), while leading his splendid chestnut steed with one hand (horse is curb-bitted and holds his head high, parading :) )  and the right hand with a risen menacingly 'nadziak' or a steppe and eventually Turkish, Polish, Hungarian version of horseman  bec-du-faucon (pico de grajo).
Rider behind the turbaned ghazi is carrying  a heavy lance, painted, not dissimilar to the Polish Winged Hussar lances or even earlier Renaissance and medieval ones. His left side is covered by a leopard pelt - is he a Turkish hussar?
The foreground rider - and the most striking out of them, is a very muscular man with a shaved head but for a 'scalp lock' of the Slavic tradition. He has a red hat on his back, a type called by prof Zygulski jr. a Bosnian hat, so perhaps these riders were Bosnian converts. This man is caring a tuck/estock (panzerstrecher) underneath his left thigh, while his curved Hungarian style sabre is out of its sheath, being brandished in a typical manner -high above one's head.  Curb-bitted stallion has some interesting horse tack, especially the crouper  with what appears to be copper or brass bells, not dissimilar form the Spanish conquistadors bells used in the Americas.
The last man is wearing a bear coat, perhaps harking back to the ancient warrior rites  of the Indoeuropeans, where bear-men were the most fearsome warriors. Addition of a bird of prey wing on top of his head seems to go back to the steppe tradition of the Saka, Sarmatians and ancient Turks. He also has a nice Hungarian sabre, so popular with the Eastern European nobility and warriors during the XVI century.
Finally, the boots and spurs on these warriors are similar  to Polish and Hungarian ones.
More Delilers from the Ottoman Turkish  miniatures, done in the second half of the  XVI century. 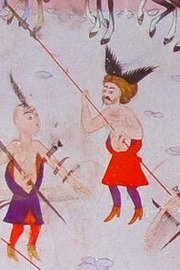 6 years ago these soldiers were subject of a nice historical miniature, but not error free,  soldiers diorama at the Boston World Expo, work done by two Italian miniaturists Cartacci and Mariano Numitone , and I took some photos of them  Boston_Expo/Cartacci-TooLate.jpg 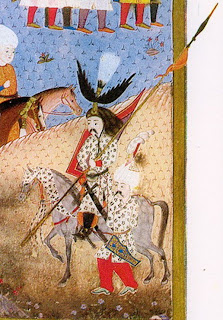 I will speak more about the image of a deliler on the right some other time.. 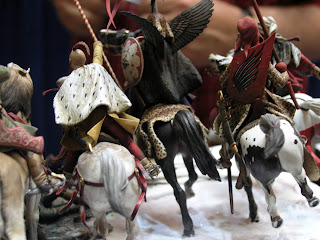 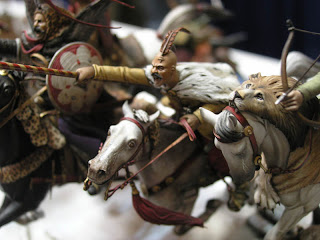 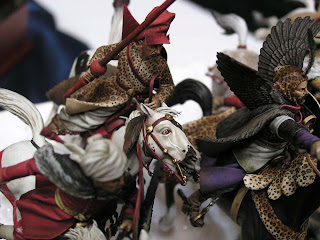 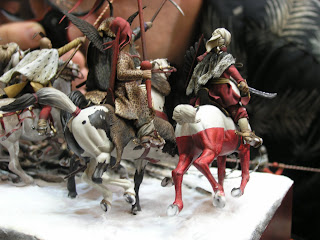 Greetings Dario!
You wrote:
'Fearsome delilers - perhaps the best warriors of the Ottoman Army'
I'm just wondering if fame of'mad horsemen' is not exeggarated? After all they were small in number, just low percentage of whole Ottoman's cavalry - true to be told, I cannot remember any details of famous deeds of delis... If You have any such stories I would love to hear about them, up to date my favourite description of Ottoman formation is one of their infantry at battle of Vienna ;)
http://kadrinazi.blogspot.com/2010/04/po-gowach-twarzach-i-rekach-wieden-1683.html

I am not sure if they were the bravest but definitely they seem to fit that description, and they are mentioned in the sources, be it only for their attire. But the Ottoman manuscrips, especially the Süleymanname, where such delilers are mentioned by name, and this was the closest I got to many details on their 'deeds' on a battlefield. I think in time I will get to those images and describe some of the actors, I hope..
I am reading now the papers of Ogier de Busbecq, his Turkish Letters so I hope to get to some details. Another one I have and have to revisit is the accout of count Wenceslas Wratislaw, late XVI century Habsburg diplomat in Ottoman Turkey.
so I do hope to shed more light on thos subject, although I am mostly looking to shed some light on the Turkish horses.
pa ka
ps great entry on your blog!

I'm not best in field of Ottoman's army as You can guess, so I'm always eager to hear new informations about them. Thanks for sharing such info on You great blog!

Re PS :) I guess You're refering to 'ikonografia'? I was hoping people will find it interesting. Today I'll add some (hopefully interesting) information about Crown units under Weiher's brothers command in period 1632-1657.

Well Uyar/Erickson (2009) in "A military history of the Ottomans" that largely draws from Turkish sources has this to say about Deliler units:

The Delis were a totally different type of Ottoman soldier.Most of them were recent
converts to Islam (usually from Bosnian, Serb, and Croat origins) and were fanatically
dedicated to wage war against infidels.* They wore exaggerated and wild
costumes as uniforms, which were a mixture of furs and feathers of animals of prey.
Their weapons also looked terrifying with exaggerated features and accessories. However,
all these served a very important purpose, which was to terrify the enemy. With
their wild and vicious outfits and their almost supernatural courage and daring the
Delis became contemporary phenomena, and sometimes their presence alone intimidated
enemy units.141 Moreover, in addition to their raiding potential, they turned
out to be more useful than the Akıncıs in conventional military duties due to their
superior command, control, and organizational structure. (p.60)

See also Crisis of the Ottoman Empire: prelude to collapse 1839-1878 (pages 107-109) via google books, which focuses on Deli and frontier cavalry in general (it appears that they periodically switched sides from Ottomans to Hapsburg and vice verse, nothing really new as far as Balkans are concerned)

*though some were Christian ,see: www.cdsee.org/pdf/workbook1_eng_ed2.pdf p.107

Dario thanks for putting up those pics (as well as for your in depth commentary), i think that the "Too Late!" miniature looks downright awesome :)

the picture you posted from Vienna Codex also features in a Hungarian article (partly) written by Pál Fodor: http://vmek.oszk.hu/01900/01911/html/index51.html , note that Fodor identifies them as Martaloshes (which did not necessarily have to be cavalry only, nor were they purely Southern Slavic; majority of them were Christian excluding their chief, the Martolos-Bey that was exclusively a Muslim; the man in the anima cuirass with the Turban is thus probably the group's superior). As the Martoloshes lived on the frontier it is entirely possible that they might share some common features with both the Delis as well as the Hussars.

Funny you mention Wenceslas Wratislaw , I think it was him that on his travel differentiated between "our hussars" and the "Turkish hussars".

Overall though I think the whole codex is probably the most detailed drawing of an Ottoman army ever created. You can for example see the "cats-head" pommel on the leftmost pallashe as well as on the rightmost sabre (usually found on the beautiful Balkan "Slavic" swords like Schiavona or Schiavonesca). See also http://upload.wikimedia.org/wikipedia/de/5/5c/Wesir.jpg , the bodyguard in the center has a similar Pallashe with a cats-head pommel. Seems that the Turco-Christian influence went both ways!

As promised in the earlier thread I have finally managed to found the imo first depiction of Deli cavalry( coming from the Thurocy Chronicle, cca 1488): http://i41.tinypic.com/ifbech.jpg ,

it comes from this site:

http://www.bosnahistorija.com/index.php/srednjovjekovna/667-post-srednjovjekovna-bosna-slike-i-komentari-
(the second picture..) interesting to note is the Latin phrase
" De exercitu hungarorum in partibus Bosne debellaro Sequitur" I cant read Latin but It seems to mention both Bosnia as well as the Kingdom of Hungary. Furthermore the author of the article recognizes the seal of Stjepan Kotromanic (presumably on the shield of one of the Delis).

As to the bravery/usefulness of the Delis , Uyar and Erickson (2009,p.60) in "A military history of the Ottomans" have this to say about them:

The Delis were a totally different type of Ottoman soldier.Most of them were recent
converts to Islam (usually from Bosnian, Serb, and Croat origins) and were fanatically
dedicated to wage war against infidels. They wore exaggerated and wild
costumes as uniforms, which were a mixture of furs and feathers of animals of prey.
Their weapons also looked terrifying with exaggerated features and accessories. However,
all these served a very important purpose, which was to terrify the enemy. With
their wild and vicious outfits and their almost supernatural courage and daring the
Delis became contemporary phenomena, and sometimes their presence alone intimidated
enemy units.141 Moreover, in addition to their raiding potential, they turned
out to be more useful than the Akıncıs in conventional military duties due to their
superior command, control, and organizational structure. (emphasis mine)

The authors draw mostly from Turkish language sources, thats probably the reason they (the Deli) are not that widely known.

Señores,
super thanks for your excellent comments.

Michal, yes, I am referring to iconographic materials - the painted miniatures :) Going over to your blog to read the fine posts as soon as I can :)
Samuel,
According to Encyclopedia of Islam, Martolos (from Greek armatolos- weapon carring, or amartolos -gone astray , while Pal Fodor i Geza call them marauders) seemed to have been the exclusively Christian (re'aya and Vlach) Ottoman 'police forces' in the Balkans, acting against peasantry disturbances and small rebellions withing those provinces, they were part of the 'askeri' (military), and they were led always by a Muslim (martolos bashi, martolos agashi, martolos bashbughu). They kept their holdings within the timar system, were loyal to the Sultan, position heritable, and exempted from djizia taxes and local taxes. They took part in wars, but mostly guarded the frontiers, acted as police, guarded towns, important passes (derbend), mines and fortresses, rarely as tax collectors etc. Did serve both on foot and horse. By 1722 they were gone (Christian subjects being forbidden to serve in the own units ) from Ottoman military, merged with Muslim pandors. There are very precise numbers of martolos for the province of Buda in the XVI century - 1569-91- , varying from 1400 to more than 9000 men (but this they share with faris , who in previous count were more than 5000) .
I daresay these are not the martolos troops as they have that 'wild' deliler look. but then who knows, I have not seen the description in the Codex.
Influence - sure it went both ways, not to mention that the Turks inherited and were proud of heir Rum (Byzantine) imperial past. Weapons were bought and traded across the frontier, so influence was a must. Due to their wars in the eastern part and in the North eg, in the XVII century Turks were importing lots of materiel from European merchants, especially gun powder, swords and muskets.

Delis or delilers - the citation very much welcomed here!

There is plenty I should learn about the Ottoman military, perhaps learning Turkish would help, time will show. also, the Hungarians are studding this period very closely, but I know no Hungarian but for few words.

"There is plenty I should learn about the Ottoman military, perhaps learning Turkish would help, time will show. also, the Hungarians are studding this period very closely, but I know no Hungarian but for few words."

Same here Dario!
also thanks a lot for posting those Cartacci/Numitone miniatures of Delis , they sure look awesome :)