Merhaba :)
I found some more interesting depictions  of Turkish horses - from the AD 1737 English publication titled 'Sportsman Dictionary, ' vol 11.
"These horses are originally natives of Greece [ Byzantium ], and bear an extraordinary price with us [English], partly because of their extraordinary beauty, and partly because of the great expense of bringing them over [from Ottoman Empire to England].
These Turkish horses have fine heads, somewhat like Barbary ones, beautiful fore-hands, and straight limbs, rather small than large, are of a most delicate shape, their pace is genteel and graceful, and besides they are horses of good spirit.
Their coats are smooth and short, their hoofs long and narrow, which is a sign of swiftness; in a word, there are horses of great beauty courage and speed.
Their colour is, for the most part, grey of flea-bitten, tho' there are some of a bright bay colour; but most of these we have now in England, are grey."
Almost hundred years earlier, during his voyage across the seas 1647-52 English merchant Robert Bargrave visited Constantinople [Istanbul], the capital of the empire. He wrote in his travel diary:
'..but are to be seen such horses, and that in great number, as all Christendom cannot vie with; many of whose accouterments  alone are worth thousands, and those are but common which cost less than hundreds'
page 86, 'The Travel Diary of Robert Bargrave Levant Merchant 1647-1656,' ed M. G. Brennan. 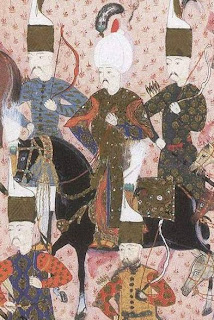 Above, Sultan Suleiman the Magnificent  Suleiman_the_Magnificent on campaign riding  one of his fine horses, surrounded by his guards.
Posted by Dario T. W. at Saturday, June 19, 2010