Salve,
While perusing Sportsman Dictionary vol. 11, published 1737,  I found the following depiction of our Polish horses:
"These are much like the Danish horse, and are generally about the size of the Spanish Jennet, are of a middle stature, but their limbs are much better knit together, and are of a much stronger make, than the Spanish ones.

This horse is in many respects, like our natural English horse, except that their head are somewhat slenderer, like the Irish hobby; but  their necks and crests are raised upright, and very strong; their ears are very short and small, and their backs capable of bearing any weight; their chines [shins] are broad, their hoofs are judged to be as good as those of any horse in the world.
They are very good for a journey, and will endure long ones, with more ease than any other horse" 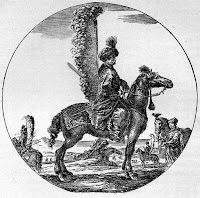 The attached  prints,  done during the late 1645 to  1651AD  in France,  by the Italian  draughtsman and master printmaker Stefano della Bella you can see such horses [nota bene this etching above  was used by Richard Brzezinski to reconstruct a winged hussar for this Osprey book - Polish Winged Hussars ] 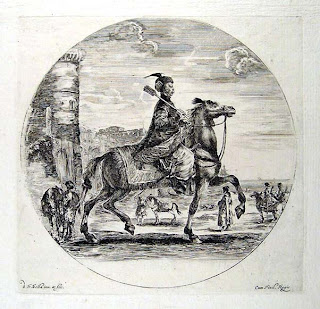 Almost 60 years later, in their 1790s edition, famous  Encyclopedia Britannica editors wrote:
'Polish horses are like Danish, only the have not so fine a fore-hand, their colour is generally a bright bay, and that of the outward peel of the onion, They are fiery and vicious, '
while the depiction of the Danish horse is as follows:
'Danish horses are low, short, and square, but they have a fine head and short hair.' 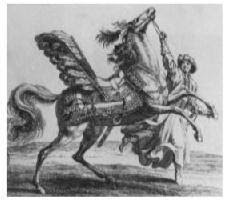 nice page with medieval and early modern horse tack, including a blurred image of a winged Polish horse from 'Certamen Equestre' series ( these Eimmart prints   commemorate the 1672 horse parade at the Swedish court of Karl XI ) horse tack 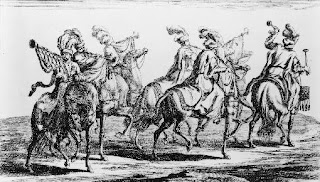 this one above is one of the G.C.  Eimmart's prints showing Polish musicians on Polish horses. Please note that many of the Eimmart's prints were used by the Poland's preeminent military costume historian and fabulous artist, pan Bronislaw Gembarzewski. Unfortunately his works were burnt during the savage destruction of Warsaw by the Hitler's Germans in 1944, and they mostly survive in microfilms and old publications, especially valuable are his books:  Żołnierz polski. Ubiór, uzbrojenie i oporządzenie wojska polskiego od XI wieku do 1831 roku (from microfilms published in 1960-1966, 4 volumes) [this one is a compilation of then available sources on Polish military men and their horses] , Wojsko polskie. Królestwo Polskie.  1815-1830  [Polish Kingdom] (1903), Wojsko polskie. Księstwo Warszawskie. 1807-1814  [Duchy of Warsaw] (1905), Husarze [Winged Hussars]  (1500-1775) (1939)
Posted by Dario T. W. at Saturday, June 19, 2010