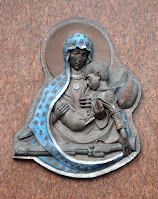 I am saddened by a sudden death of the Polish-American sculptor Andrzej Pitynski in Mount Holly, New Jersey.
Polish National Radio on His passing.

there is one of his masterpieces waiting yet to be erected somewhere in Polish Republic -
Namely, this is a monumental (almost 15 meters high) sculpture dedicated to the horrific event  during World War II- the genocide of the Holocaust proportions (perhaps  as many as 200,000 men, women and children) of the Polish peasantry perpetrated by the Ukrainian neighbors in Wolyn, today Volhynia rgion in Ukraine in 1943.
Maestro had sculpted it and shipped and cast in  Poland - all paid by the Polish Army Veterans' Association in America. The monument has been waiting in Gliwice since 2017 yo be erected but no city has yet agreed to have it in its public space, perhaps the cowardly politicians are afraid of its powerful message and symbolism. 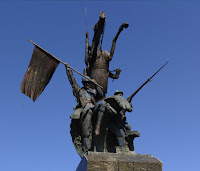 and this Polish portal Kresy claims that under the appellate court order in Kiev, Ukraine, the symbols of the SS Galitzen are not prohibited in Ukraine https://kresy.pl/wydarzenia/regiony/ukraina/ukrainski-sad-symbolika-ss-galizien-nie-podlega-ustawowemu-zakazowi-propagandy-nazizmu/