Salvete Omnes,
spring is near and I am thinking about training horses, and the French National Library on the web aka Gallica (but also world digital library or Archive)  offers a read and historian a peak into the Monsieur du Pluvinel-influenced circle of French horse trainers, riders and their horses.

This time we have a nobleman and soldier Rene de Menou seigneur de Charnizay, 1578-1651, who was a disciple and friend to the royal ecuyer Antoine de Pluvinel, inherited his master's work, and in AD 1628 published a new version of Maneige Royal as L'Instruction du Roy et al, that was supposedly closer to the writing of du Pluvinel than the first edition (after Hilda Nelson's discussion in her preface to the Le Maneige Royal Or, L'instruction Du Roy: En L'exercice De Monter a Cheval, AD 2015 edition).
De Menou wrote and published a work  titled La pratique du caualier, ou, L'exercice de monter a cheual  and we have from Gallica hies work published in AD 1650 (but earlier versions exist - 1612 and 1620). However, de Menou mentions du Pluvinel in his book and apparently he was writing within the circle of du Pluvinel's ideas and teachings.
Parts of that work will be the subject of today's post and perhaps one more post.

This equestrian work is most curious because it lists several types of horses native to the French Kingdom and its parts - Gascongne (Gascony), Lymousin (Limusin), Poictou (Poitou), Normandie, Bretagne, Comte de Bourgongne (County of Burgundy). 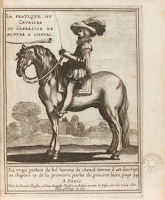 also author includes a short description of horses from 'Germanies' (Holy Roman Empire) and Flanders (most popular and easy to obtain), Italy, Spain (difficult to obtain), and the Ottoman Empire - Turkish and Arabian horses (but very few and far between), as well as the North African horse know then and now as Barb.

Unfortunately there are no Polish horses that entered the realm of signeur de Charnizay, but then in the Polish Lithuanian Comonwealth the French horses were not know for their qualities then as well, so I guess some type of quid pro quo.
So there are some pages from the book, corralled by me, describing  horse types or even breeds, according to their origin, for riding, mange and lists.