Chariots of the Kingdom of Two Lands

Salvete Omnes,
Spring is here, Baroque horses and Polish winged hussars can wait for another day, so today we are traveling to the New Kingdom of Two Lands or Aegyptus ( the ancient Greek name for the kingdom of the Nile valley, used in Odyssey by Homer,  orAigyptos - Αἴγυπτος ).
these energetic ancient Hellenes had settled as traders and mercenary soldiers in Egypt in Late Bronze Age/early Iron Age, and eventually after the Macedonian conquest of the Achaemenid satrapy of Egypt they had ruled the land of the Nile for centuries  before the Octavian's Roman legions came and put an end to the Macedonian dynasty and ushered in 6 centuries of Roman rule, eventually the conversion to Christianity and the birth of Coptic  nation  ( presently in danger of being obliterated in post-1952  Republic of Egypt that is mostly Arabic and Islamic in culture and religion; nota bene I know quite of few Copts in the US and Canada and hear  their stories).
Just a little post to signal my interest (and hopefully yours, dear traveler) in the beauty of the chariot horse and the chariot itself, instruments of war from before.
so here below we have a few images of great warrior  pharaoh of the XIX Dynasty  Ramses II (who was a fair-haired or reddish-blond man, as his surviving mummy shows  ) war exploits and leadership, 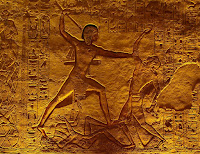 always most resplendent and bellicose when riding in his chariot, with his trusted bows and arrows in hand, javelins and deadly  khopesh sword resting near.

also this beauty of sumptuous art, for it is a ring with chariot horses from Ramses II (held at the Louvre Museum in Paris, France) 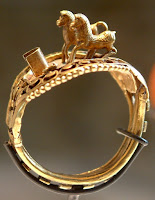 enjoy
ps
all images are from Wiki Commons