Salvete omnes,
some time ago I read Maurice de Saxe 'Reveries or Memories Concerning the Art of War'  and actually posted his ideas about the mechanical hackamore as ideal for cavalryman.
Presently, I finished looking over, not closely studying, but skimming, of the new Osprey book titled The Cavalry Lance (2017) - the book, well, this work should have been titled The British Cavalry Lance.. But I shall do a more detailed review once I will have read the entire book with some notes and commentaries, so my opinion will be augmented with page citation etc. But in short I am puzzled and disappointed by this book, to say at least.

The authors did not mention de Saxe so in order to lay some groundwork for my review.
Hence here I feel I have to return to the subject  of de Saxe cavalry, especially since he had advocated and actually used lance-armed cavalry during his years as a commanding general in the French service. Curiously, in other Osprey titles other authors did mention de Saxe and his cavalry, including his lancers.

Presently, I will share with you de Saxe ideas for a lancer cavalryman, in armor and with a Polish winged hussar lance/kopia husarska.

He calls them Horse and imagined that 40 squadrons were sufficient for an army of 40-50,000 men. 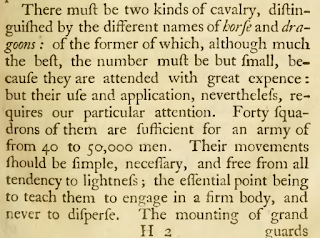 some of the de Saxe notes on the appearance and equipment, taken from the translated version: 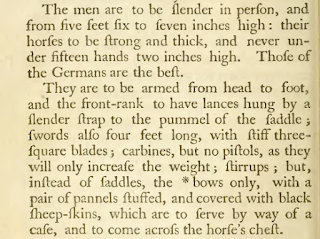 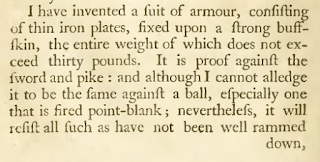 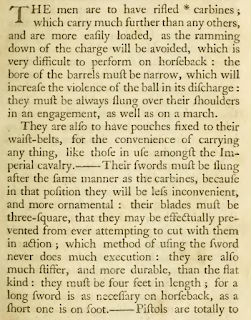 The English translator failed here as per lances (these must have been very foreign to the British readers during the time of publication MDCCLIX), but I am going to add it anyway but first the French original as written by de Saxe, especially it is important here that he calls these lances 'a la Polonoise' or in Polish [winged hussar] style: 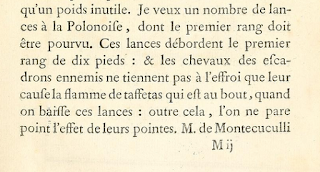 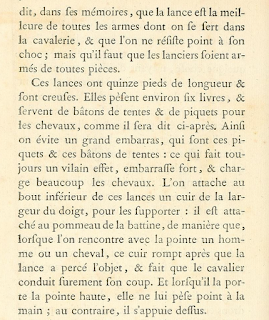 De Saxe calls for 15 feet long, hollowed lances and a lance boot attached to the front arch to be used when attacking a foe - exactly in the Polish manner
Below,  the much edited English version of the above paragraph on the lances:


to be continued
ps
I will return to the subject of de Saxe saddle as he described it some other time.
valete
Posted by Dario T. W. at Friday, February 23, 2018

https://archive.org/details/mesrveries01saxe - I used this French version