Salvete omnes,
a little change of locus -
let us visit XVI century Persia via illuminations painted for the epic poem tittled  Iskandar Nama (Iskandar-namah, Eskander-nameh) that was written originally by a XII century Persian poet Nizami Ganjavi.
As the tittle tells us this is an epic but very Persianized and Islamized (eg pilgrimage to Mecca)  story of Alexander III or the Great, in many ways the last ruler of the Achaemenid Persian empire, and a hero of many faces in the Persian and the larger heroic Islamic tradition.
Looking at the libre collection of pages from many different versions of Iskandar-namah, I decided to corral some images showing the use of lasso in combat context. Many writers writing within the context of Polish early modern history mention lasso and its use in combat, especially by the Tatars etc, but images are very few and far between.
We have to keep in mind that the Persian Safavid paintings were not particularly realistic, eg the essay written by the great Russian scholar Boris Marshak  in Pearless Images, yet these images may show some sort of reality  when using a lasso on the battlefield within the greater Eurasian milieu.
We see both mounted and dismounted attacks with lasso, used against mounted and dismounted or unhorsed foe. 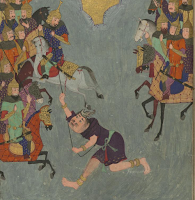 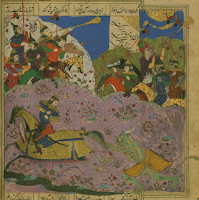 Please note,
all  images above are just the details taken by me  from the illuminated pages collected on the Wiki Commons gallery
enjoy
Valete!
Posted by Dario T. W. at Thursday, February 22, 2018