some sketches and DNA

salvete omnes
World is swirling around, with us or without us I am afraid ...

so past week I read, quite casually, some news articles related to the ancient Indoeuropeans, since their DNA still circulates in my bloodstream, making them my genetic relatives.

so first, the recent DNA testing versus the Aryan myth/reality - [article  here and original study  here ]
Until recently, only data on mtDNA (or matrilineal DNA, transmitted only from mother to daughter) were available and that seemed to suggest there was little external infusion into the Indian gene pool over the last 12,500 years or so. New Y-DNA data has turned that conclusion upside down, with strong evidence of external infusion of genes into the Indian male lineage during the period in question.
In that paper, titled “A Genetic Chronology for the Indian Subcontinent Points to Heavily Sex-biased Dispersals”, 16 scientists led by Prof. Martin P. Richards of the University of Huddersfield, U.K., concluded: “Genetic influx from Central Asia in the Bronze Age was strongly male-driven, consistent with the patriarchal, patrilocal and patrilineal social structure attributed to the inferred pastoralist early Indo-European society. This was part of a much wider process of Indo-European expansion, with an ultimate source in the Pontic-Caspian region, which carried closely related Y-chromosome lineages… across a vast swathe of Eurasia between 5,000 and 3,500 years ago”.

Also, the  celebrated Amazon of Ukok Plateau Saka.. was in fact a male rather youthful warrior - original Russian study here. -
New DNA analysis indicates unequivocally that the remains were male and not female.  The pioneering research was conducted by the Institute of Archaeology and Ethnography, the Siberian Branch of the Russian Academy of Sciences, and Novosibirsk State University. This obtained 'reliable molecular genetic data' indicating that the supposed female warrior 'was male', according to a report released by Science First Hand co-authored by Dr Alexander Pilipenko, of the Institute of Cytology and Genetics, and Dr Natalia Polosmak, of the Institute of Archaeology and Ethnography,  at the Siberian Branch of the Russian Academy of Sciences, in Novosibirsk.
The research also found that the relationship between the two people buried in the tomb at the Ak-Alakha 1 Mound 1 was not father and son but perhaps uncle and nephew. The cause of death of the pig-tailed ancient youth was not established.


Nota bene there has been a very serious discovery of the Scythian/Skudra 'town' in southeastern Poland. The discovery was announced last month at the University of  Rzeszow.
But we have to wait for more data on the subject. However, the information coming from the archaeologists is pretty clear, the Scythian zone of influence in the VII century BC reached to the Vistula River valley.. thus the textbooks on that period of Central European history need some rewriting. 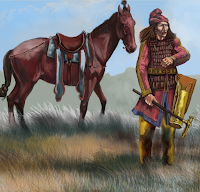 and some casual, unfinished sketches 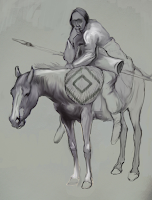