Salvete omnes,
breeding Arabian horse in the American studs is an art and long tradition/
Homer Davenport was a writer, cartoonist and  ... breeder of the pure [asil] Arabian horses in the US. Interview from 1905 in Pacific Monthly vol 14.
In 1906 returning from Asia master Homer brought 10 mares and 17 stallions, purchased during his trip to the desert Bedouins of the Ottoman Syria.

Upon his death, in 1912 the Arabian horse breeders Herbert & William Brown bought some of his Arabians, like the imported *Abu Zeyd and mares and added them to the newly established Maynesboro Stud located near Berlin, New Hampshire, while other Arabians from his stud eventually were acquired by W. K. Kellogg for his stud at Pomona, California. 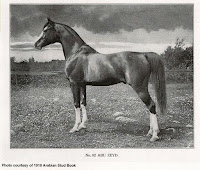 Finally, I would like to point your attention to some page-images from his  book My Quest of the Arab Horse (1909 - books is available via archive library), where is recounted his trip to the Syrian Desert, shared his knowledge of the Arabian horse and also mused about the history of the Arabian horse in the US.