I chose to share (from Wiki Commons) some paintings by the famous Delacroix, they are both violent and beautiful and reflect somewhat on our turbulent times.

In these paintings artist tried to depict  the Greek War of Independence fought by the radical Greeks against the Ottoman Empire.

This conflict begun the unraveling of the Ottoman Empire in the Balkans - Serbs, Bulgars etc fought their own wars for independence.

The Greek came out in some rather strange way from this struggle, their country was very small, with the majority of the ethnic Greeks and traditional Greek territories outside of this new state. The state - a kingdom-    in fact was  a very unfunny mix of then-superpowers' agenda (mostly British), for it was in fact a strong check on ethnic and nationalistic designs, with the type of government established and their Bavarian ruling dynast imposed on them [sort of like at the present, where the state is bankrupt and the Greek people are run the German banks and Communist 'traitors' - I guess they gave up their liberty with leaving drachma by taking the euro currency] .
Eventually the Greek kingdom failed to liberate their proper Greek lands in Asia Minor and eastern Thrace during the subsequent wars with the Ottomans and in consequence suffered expulsion of the entire Greek population from Anatolia (Western Asia) and Constantinople thus ending 3000 years of Greek Anatolian culture.
Great Britain was the champion of the Ottoman status quo through out the XIX and early XX century (up to World War I) then supported some Greek aspirations if they enter the war on behalf of the allies. However, the British were not willing to allow the Greeks to take all the Greek-populated lands in Western Asia - the Megali Idea - but limiting the Greek take on the Ottoman territories only to Smyrna [present Izmir] and really as a counterbalance to the Italian (and French) designs on the Ottoman lands - which lead to the Greco-Turkish War in 1919. Eventually the new leader of the Turkish state Mustafa Kemal Pasha outwitted the British in this game, mostly by using the Bolshevik scare, and the British did not materially side with their Greek proxy in the persecution of the war against the Nationalistic Turks. - this thesis  describes the Greco-British relations up to the end of the Greco-Turkish war in 1922 and subsequent peace settlement in 1923.

Nota bene, it was Great Britain that gave us Poles the infamous Curzon Line, that in 1939 and again in 143-45 provided the excuse and allowed Stalin to take away from us our beloved Kresy with cities like Lwów (Lviv) etc). And it was Great Britain that did not allow for the return of city of Gdansk (creation go the strange Free City) and most of former land taken by Prussia in 1772 etc to the newly reestablished Poland in 1919 - it was only the show of arms: via the Greater Poland and Silesian uprisings that brought these parts of Poland back to the Motherland.

ad rem,
Delacroix  was self-interested in his creations on the subject of the Ottoman-Greek struggles, for he was trying to make a name for himself in the Parisian art circles, especially with the painting tittled The Massacre at Chios. He did succeed and is considered as one of the masters nowadays.

The native costumes of the combatants are very similar, turbans are the sign of the Ottomans, while the horsetack is wholly Ottoman.


combat between a giaour [infidel, probably Greek] and Ottoman pasha 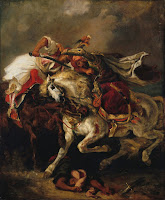 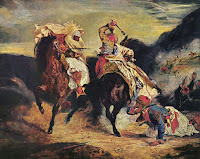 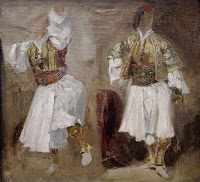 and this image is powerful and very violent

ps
While I lived in Brooklyn, I used to frequent the Kesso Greek yogurt manufacture and store in Queens,  the wonderful owners were of rather very advanced age  and themselves had been refugees from the Turkish pogroms in Istambul in 1950s. I used to listen to their quite wonderful stories about life  in the ancient city in the 1940s while eating various yogurts (more fat and different 'baking' times) and delicious home made Greek dishes.
Posted by Dario T. W. at Sunday, June 04, 2017

Terror times again within Europe, so meantime in Czech Republic the self defense by means of guns is allowed and encouraged, at least according to the Washington Post which may or may not be true in its entirety, as WP is known to have various truths and degrees of truthfulness https://www.washingtonpost.com/news/worldviews/wp/2017/01/06/czech-government-tells-its-citizens-how-to-fight-terrorists-shoot-them-yourselves/?utm_term=.bc97738726df

Terror-fueled panic attack or fear of bomb attack led to perhaps as many as 1,500 injuries in Turin
http://www.corriere.it/sport/17_giugno_03/torino-panico-piazza-la-finale-champions-120-feriti-5d90b78c-48a6-11e7-beec-6fc3ec1d3e39.shtml
https://www.reuters.com/article/us-soccer-champions-final-italy-panic-idUSKBN18U0XX