Salve,
Spring may be in the air, as the skies are beautiful today and sun is shinning strong, but there is still plenty of snow on the ground. City  Dept' of Transportation trucks  are not cleaning the streets but I still have to move my car due to the street cleaning regulations. Lack of common sense sooo apparent, the XVII century Poles used to say that Poland was not the government (i.e. the king) but her people.  They did love  their liberty, but to be fair these believes and actions taken  led the Polish-Lithuanian state to a doom in 1795 and was followed by  more than a century of eradication  from the maps of the world, sanctioned by all European powers and subsequent Polish state absence in  world's affairs (the honorable exception being the Ottoman Turkey that never recognized the partitions of Poland )
http://en.wikipedia.org/wiki/Partitions_of_Poland 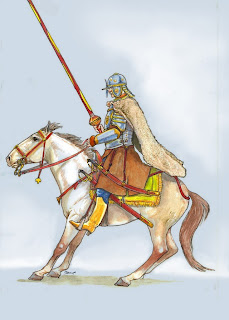 Anyway, I played with my Gimp program a bit this morning, and this is the result - a hussar towarzysz executing a stop or I hope that he looks like he may be doing such essential horsemanship  maneuver.
Posted by Dario T. W. at Monday, March 01, 2010

I have to ask this Dario , because I haven't stumbled upon a desirable answer anywhere... what was the MAIN purpose of those straight bladed pallashes? It appears that some Hussars (officers?) carried the tuck(koncierz),which was an "armour piercer" and a sort of "sword-kopija" in some respect.. However what's the purpose of a Pallash then? Are they meant for some heavy duty from-the-horseback cutting or are they more a stabbing/piercing weapon like those tucks? I am a bit puzzled since outside of Polish-Hungarian hussars (with respect to the 16-17centuries) no other nations bothered with such weapons to my knowledge. Westerners tend to had just one type of sword.. while the Turks (Ottomans) have had the Tuck in addition to the sabre (in fact I have read somewhere that it was them who introduced the custom into central/eastern Europe). The only exception I found as far as the Ottomans are concerned where the border-martaloshes who had their gear very Hungarian-esque (anima curiasses, Hungarian sabres , no quiver/bow etc. see for yourself http://mek.niif.hu/01900/01911/html/index51.html) So my question is... why to carry a Pallash for cutting if you have a sabre?.. and why bother stabbing with it if you can have a Koncierz?.. Both of those seems ultimately better at their respective tasks (i.e. szabla for cutting while koncierz at stabbing/piercing)

I am having trouble comprehending this.