Salve,
the month of May will end today - what a pity, but then all the wonders of the summer fruits are upon us - strawberries, wild strawberries, blueberries, cherries and other berry fruits...

ad rem, it has been a while since the last visit to the glorious world of the XIX century horsemanship - and present Mr Baucher. part of the French school of horsemanship.

before I turn to this ecuyer I should quote, again, the passage from Xenophon's horsemanship work (this time in Morris H. Morgan translation) on rider's seat-


''When the rider takes his seat, whether bareback or on the cloth, I do not approve of a seat which is as though the man were on a chair, but rather as though he were standing upright with his legs apart. Thus he would get a better grip with his thighs on the horse, and, being upright, he could hurl his javelin more vigorously and strike a better blow from on horseback, if need be. His foot and leg from the knee down should hang loosely, for if he keeps his leg stiff and should strike it against something, he might get it broken; but a supple leg would yield, if it struck against anything, without at all disturbing the thigh. Then, too, the rider should accustom himself to keep his body above the hips as supple as possible; for this would give him greater power of action, and he would be less liable to a fall if somebody should try to pull or push him off.'' 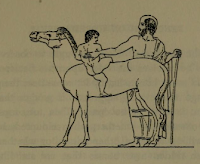 Mr. Francois Baucher has never 'visited' this blog hence the time is ripe to rectify this omission and kill two birds with one stone. - from 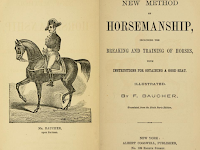 ''A METHOD OF HORSEMANSHIP, FOUNDED UPON NEW PRINCIPLES: INCLUDING THE BREAKING AND TRAINING OF HORSES WITH INSTRUCTIONS FOR OBTAINING A GOOD SEAT.'' (2nd American edition)

The seat of the rider. The rider will expand his chest as much as possible, so that each part of his body rests upon that next below it, for the purpose of increasing the adhesion of his buttocks to the saddle; the arms will fall easily by the sides. The thighs and legs must, by their own strength, find as many points of contact as possible with the saddle and the horse s sides; the feet will naturally follow the motion of the legs. You see by these few lines how simple is the rider s seat.
now the lessons on how to obtain a good seat -

PREPARATORY LESSON
This course will make the rider expert, and consequently intelligent. One month will not elapse without the most stupid and awkward recruit being able to seat himself properly without the aid of the word of command. Preparatory lesson (the lesson to last an hour, two lessons daily for a month). The horse is led upon the ground, saddled and bridled. The instructor must take two pupils; one will hold the horse by the bridle, and observe what the other does, that he may be able to perform in his turn. The pupil will approach the horse s shoulder and prepare to mount ; for this purpose he will lay hold of and separate with the right hand, a handful of mane, and pass it into the left hand, taking hold as near the roots as possible, without twisting them ; he will seize the pommel of the saddle with the right hand, the four fingers inside, and the thumb outside; then springing lightly, he will raise himself upon his wrists. As soon as his middle reaches the height of the horse s withers, he will pass the right leg over the croup, without touching it, and place himself lightly in the saddle. This vaulting will tend to make the man active; and he should be made to repeat it eight or ten times, before letting him finally seat him self. The repetition of this exercise will soon teach him the use of his arms and loins.
... 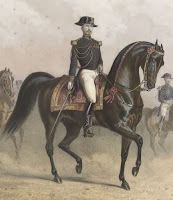 ...
Exercise in the saddle. (This is a stationary exercise on horseback ; an old, quiet horse to be chosen in preference ; the reins to be knotted, and to hang on his neck.) The pupil being on horseback, the instructor will examine his natural position, in order to exercise more frequently those parts which have a tendency to give way or stiffen. The lesson will commence with the chest. He must expand the chest, and hold himself in this position for some time, without regard to the stiffness which it will occasion
at first. It is by the exertion of force that the pupil will become supple, and not by the abandon so much and so uselessly recommended. A movement at first obtained by great effort, will not require so much force after a while, for he will then have gained skill, and skill, in this case, is but the result of exertions properly combined and employed. What is first done with twenty pounds of force reduces itself afterwards to fourteen, to ten, to four. Skill will be the exertion reduced to four pounds. If we commenced by a less, we would not attain this result. The flexions of the loins will be repeated, allowing the pupil often to let himself down into his natural relaxed position, in order to accustom him to throw his chest quickly into a good position. The body being well placed, the instructor will pass : 1st. To the lesson of the arm, which consists in moving it in every direction, first bent, and afterwards extended ;
2d. To that of the head ; this must be turned right and left without its motions reacting on the shoulders. When the lessons of the chest, arms, and head give a satisfactory result, which ought to be at the end of four days (eight lessons), we will then pass to the pupil s legs.
He will remove one of his thighs as far as possible from the quarters of the saddle; and afterwards replace it with a rotatory movement from without inwards, in order to make it adhere to the saddle by as many points of contact as possible. The instructor will watch that the thigh does not fall back heavily; it should resume its position by a slowly progressive motion, and with out a jerk. He ought, moreover, during the first lesson, to take hold of the pupil's leg, and direct it, to make him understand the proper way of performing this displacement. He will thus save him fatigue, and obtain the result more quickly.
This kind of exercise, very fatiguing at first, requires frequent rests ; it would be wrong to prolong the exercise beyond the powers of the pupil. The motions of drawing in (adduction, which makes the thigh adhere to the saddle), and putting out (abduction, which separates it from the saddle), becoming more easy, the thighs will have acquired a suppleness which will admit of their adhesion to the saddle in a good position.
Then comes the flexion of the legs.
end of part 1
Enjoy

Yesterday it was the Memorial Day in the US - and some low, low individuals defaced Vetrans' Memorials in the US, desecrated graves etc - shame on them - http://usmclife.com/2016/05/memorials-tarnished-across-us-vietnam-wall-tagged-graffiti-civil-war-graves-dug/