Salve,
American Indians of the Plains are famous for their association with horses and horsemanship feats, but not seldom it is forgotten or omitted that often (the wholly nomadic tribes) and at times (in case of the earth or grass lodge dwellers)  the entire household was also transported on horseback (and dog back) or pulled loaded on travois, especially during the golden era when the Comanches ruled the southern plains while various nations and tribes skirmished over the northern and central plains...

The work of setting up or taking down of the conical tents/lodge known as tippi / teepee (from the Dakota Sioux language ), gathering and cooking food, working hides, making clothes, carrying for children, accompanying the men on hunts to dress the carcass and prepare meat for the most important food product of the plains pemmican, tending to small gardens etc was done by women and girls  while their men were hunting, stealing horses or on war-party, and boys were busy watching the horse herds and gentling horses or hunting for small game.

Notwithstanding these domestic and economic duties and obligations that the women carried in the very masculine and bellicose societies of the Great Plains nomads, some women undertook taking active role in the war parties (as we know from the records of the frontier wars between the US military and the nomads - eg Mo-chi, Buffalo Calf Road Woman, Moving Robe Woman, Minnie Hollow Wood, The Other magpie ), while others took active part in negotiations and other diplomatic relations leading to cessation of hostilities or simply truces. 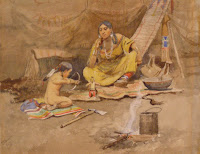 In pre-horse era of the Great Plains Indians cultures during the historic period (after 1500AD) their women were obviously the desired target of kidnapping/slaving parties carried by the enemy warriors, thus those women would become captives and slaves, and some eventually would change their status to adopted tribal members  and wives to their captors.

Once the horses became companions of the Plains Indians during XVII century Apacheria (excellent dissertation on the subject, plus Frank R. Secoy's work)/Jumano/Ute/Caddo horse distribution period and later during the Comancheria of XVIII century domination, the entire warrior ethos of the Great Plains Indians turned to horse capturing and coup counting as the primary pursuits for the warrior. Researchers like professor John C. Ewers ( in this book ''Plains Indians Culture,'' p.196 ) suggest that the custom of stealing women during the pre-horse era and the honours associated with that activity  were actually appropriated/addopted as the model for the horse stealing raids during the post-horse era (that lasted until the 1880s AD).

Well, there is a tale gathered from XIX century Blackfeet by an Anglo traveller named Julian Ralph. He was travelling in company of Frederic Remington (and Charles M. Russell's drawings and paintings) whose art (in public domain) is gracing this post.


Old Sun and his wife:
"...to our joy, we found seated in that room the famous chief Old Sun. He is the husband of the most remarkable Indian squaw in America, and he would have been Crowfoot's successor were it not that he was eighty-seven years of age when the Blackfoot Cæsar died. As chief of the North Blackfeet, Old Sun boasts the largest personal following on the Canadian plains, having earned his popularity by his fighting record, his commanding manner, his eloquence, and by that generosity which leads him to give away his rations and his presents. No man north of Mexico can dress more gorgeously than he upon occasion, for he still owns a buckskin outfit beaded to the value of a Worth gown. Moreover, he owns a red coat, such as the Government used to give only to great chiefs.
Mr. Remington was anxious to paint Old Sun and his squaw, particularly the latter, and he easily obtained permission
Old Sun's wife sits in the council of her nation—the only woman, white, red, or black, of whom I have ever heard who enjoys such a prerogative on this continent. She earned her peculiar privileges, if any one ever earned anything.[...] When Old Sun [24]brought his wife to sit for her portrait I put all etiquette to shame in staring at her, as you will all the more readily believe when you know something of her history.
Forty or more years ago she was a Piegan maiden known only in her tribe, and there for nothing more than her good origin, her comeliness, and her consequent value in horses. She met with outrageous fortune, but she turned it to such good account that she was speedily ennobled. She was at home in a little camp on the plains one day, and had wandered away from the tents, when she was kidnapped. It was in this wise: other camps were scattered near there.
On the night before the day of her adventure a band of Crows stole a number of horses from a camp of the GrosVentres, and very artfully trailed their plunder towards and close to the Piegan camp before they turned and made their way to their own lodges.
When the Gros Ventres discovered their loss, and followed the trail that seemed to lead to the Piegan camp, the girl and her father, an aged chief, were at a distance from their tepees, unarmed and unsuspecting.
Down swooped the Gros Ventres. They killed and scalped the old man, and then their chief swung the young girl upon his horse behind him, and binding her to him with thongs of buckskin, clashed off triumphantly for his own village.
That has happened to many another Indian maiden, most of whom have behaved as would a plaster image, saving a few days of weeping.
Not such was Old Sun's wife.
When she and her captor were in sight of the Gros Ventre village, she reached forward and stole the chief's scalping-knife out of its sheath at his side. With it, still wet with her father's blood, she cut him in the back through to the heart. Then she freed his body from hers, and tossed him from the horse's back. Leaping to the ground beside his body, she not only scalped him, but cut off his right arm and picked up his gun, and rode madly back to her people, chased most of the way, but bringing safely with her the three greatest trophies a warrior can wrest from a vanquished enemy. Two of them would have distinguished any brave, but this mere village maiden came with all three. From that day she has boasted the right to wear three eagle feathers.
Old Sun was a young man then, and when he heard of this feat he came and hitched the requisite number of horses to her mother's travois poles beside her tent. I do not recall how many steeds she was valued at, but I have heard of very high-priced Indian girls who had nothing except their feminine qualities to recommend them. In one case I knew that a young man, who had been casting what are called "sheep's eyes" at a maiden, went one day and tied four horses to her father's tent. Then he stood around and waited, but there was no sign from the tent. Next day he took four more, and so he went on until he had tied sixteen horses to the tepee. At the least they were worth $20*, perhaps $30*, apiece. At that the maiden and her people came out, and received the young man so graciously that he knew he was "the young woman's choice," as we say in civilized circles, sometimes under very similar circumstances.
At all events, Old Sun was rich and powerful, and easily got the savage heroine for his wife. She was admitted to the Blackfoot council without a protest, and has since proven that her valor was not sporadic, for she has taken the war-path upon occasion, and other scalps have gone to her credit.""
Julian Ralph, On Canada's Frontier, NY 1892

ps
More on the Plains Indian tribes and their horses in the future, I hope :)
ps'
Italian comix dell arte master Paolo Eleteri Serpieri used Remington's image of Old Sun's wife killing the Gros Ventre warrior for creation of his own image in the series  L'Histoire du Far-West ("The Story of the West") - can be seen in this collection of Western images - caveat - some drawings explicit)
Posted by Dario T. W. at Wednesday, May 02, 2012