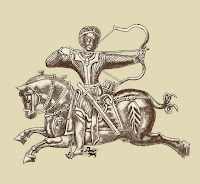 Salve,
this is a drawing from a post-Sassanian silver plate done in a style of Sassanian metal work showing royal hunts. One of the foremost experts on this art was late professor Boris Marshak, excerpts from his book with plates are here Marshak's toreutics .
This figure is the central fragment of this plate from Hermitage - http://depts.washington.edu/silkroad/museums/shm/shmsasanian.html  - from  so called  Greater Khorasan , made most likely in late VII century or later, showing a prince Pur-i (Pur-e) Vahman - so named in works by Marshak, Darkevich, Lukonin, Harper etc,  or according to Yaacov Lev  this is Arabian conqueror Ibn Rahman (however Lev's info on the horse tack and horse traditions is suspect) - galloping on his fine steed with a fully drawn bow.
A 'reconstruction' drawing along with more information on this warrior's horse and  equipment will follow later this month, fingers crossed.
Posted by Dario T. W. at Thursday, June 16, 2011

I realize English is not your first language, but it's not a 'fragment', it's a 'detail'.

A fragment is like a chip, something broken off of a larger object.

This is a very common mistake for Poles writing in English. So don't worry about it too much.

Amigo FarkinAnnoyed -
perhaps you 'need to hit' the Thesaurus so much harder these days :) for apparently you have never heard about a definition of a 'fragment' as an 'isolated portion' ... etc. And as per choice of words - ever heard about old Roman saying ''De gustibus non disputandum est''?
I must add I really do not care to discuss the languages here. Since this is my own blog I will offer this advice to you on my blog's commentary page - do start your own blog, discuss any nuances of the English language(s) and Polish speakers of English languages etc ... do not do it here.
Adios

I must add I'd love to hear comments and have discussions on the history of horsemanship, horses, art and any other subject that may pertain to the ethos of 'bagatur/ jinete/ horseman/ knight/jezdziec/chevalier/ faris/ oglan/ rycerz/ ritter/cavaliere/ caballero/ vitez/ vityaz/ vitéz/samurai etc.
pa ka :)

I have found a real treasure trove of images and I would like to share them with you (scroll down and click on the images to enlarge them) :