Salve,
it has been a nice dry Spring thus far and I am busy with horses :), riding, sketching and lately learning to train them.
A while back I 'published' this post on the Crimean Tatar sketches - http://dariocaballeros.blogspot.com/2010/01/crimean-tatars-tatarzy.html  - I have made some progress that I would like to share with you: 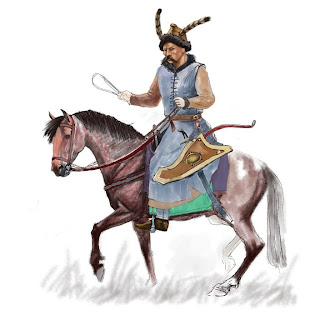 The  sketch above is based on a watercolour drawing made after mural paintings once located at the castle of Podhorce( freshly edited entry at  http://en.wikipedia.org/wiki/Pidhirtsi_Castle ), by the will of Joseph Stalin now in Ukraine, while near another old castle town of Podhajce  (some 90 km directly south of Podhorce - map here  http://maps.google.com/maps?q=Pidhaitsi&oe=utf-8&rls=org.mozilla:en-US:official&client=firefox-a&um=1&hl=en&biw=1732&bih=1234&ie=UTF-8&sa=N&tab=il ) many battles were fought, including the last  major battle ( victorious for the Commonwealth) that took place between the Polish-Lithuanian Commonwealth forces and those of the Crimean Tatars in AD 1698 (at this time the article at Wikipedia is less than miserable) 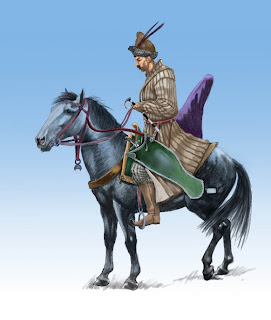 In this older drawing I had to correct the placement of the bowcase and painted a covering on the arrow quiver (known in Poland under the Tatar name of 'taftuj').
More to come...

Where do you get all the information from, or better put: where do you find it? The drawings look great, keep up the good work!