salve,
Tonight I will return to the idea included in  Messer Kadrinazi's  comment to my previous post :
"[...] in relation of English cavalrymen serving in one of 'British' company of reiters we  had information, that when those units were en route to de la Gardie's army [AD 1610] they'd defeated a contingent of 700 'Polanders', capturing 'sconce furnished vs not onely with great store of riches, but also with number of Polish Horses; and as many armes as sereud to arme fiue hundred men'. Maybe that could be idea for Your new drawing Dario ;) Scots or Englishemen on Polish horses, with some Western and some Eastern equippment :)"
well, some years ago I did draw a cavalryman of Western provenance mounted on an 'Eastern' horse et al, sort of a dragon officer in Polish serivce.  I manipulated this sketch with GIMP and MyPaint so it is quite different from the pen and ink original. 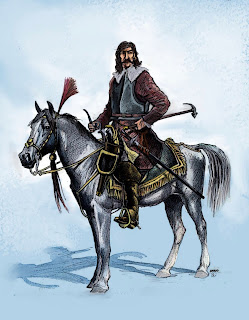 Although this image tends to show a later - mid 17th century - cavalier, I think it gives some idea about the cavalrymen from the  story told above.
Posted by Dario T. W. at Monday, May 03, 2010

Very nice one Dario, I like it! He looks like some officer lucky enought to capture proper horse :)