Salve,
I just 'cartoonized' another of my Gallic horsemen. Time frame is around  the Wars of the Second Triumvirate  ( 43 BC – 33 BC ), with the great battle of Philippi  http://en.wikipedia.org/wiki/Battle_of_Philippi  as the largest land battle of the Second Triumvirate (eg the life of one of the principal actors -Brutus by Plutarch here Plutarch Brutus   ).  HBO series 'Rome' season 2 did attempt to show the battle, but it was not the greatest reconstruction I daresay.

The great podcast (actaully just one great history of Rome in lectures) on the subject is here:  historyofrome the-second-triumvirate 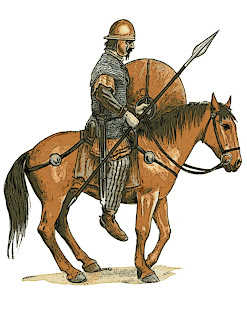