Czolem amici et viajeros,
I have been reading some and then some more on the Medieval knights and their horses. I have not posted anything on that period save for a small post on Grunwald AD 1410 and Zawisza Czarny. This will change after the Summer as I am planing to do some reconstructive drawings of the Polish (Piast and Pomeranian/Kashebe) princes and knights of the XIII (13th) century, the century which I find the most intriguing in the Poland's medieval era.
There are some iconographic images form the period, i.e., XIII century or shortly thereafter, eg famous Maciejowski Bible medievaltymes maciejowski bible   wiki Maciejowski_Bible.
One of the most famous images is the German miniature painting of our Piast Silesian prince and almost a Polish king, Henryk (Henry) Probus, included in the so called Manesse Codex wiki Codex Manesse   Manesse Codex heidelberg , a compilation of amazing miniatures showing poet knights of the Central Europe, withing the milieu of the high knightly German culture that at this time permeated or shined into the lands to the east and north of Germany proper. 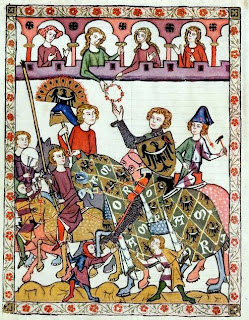 Henryk Probus Henry IV Probus in full glory as a younger man (there is also  his famous sepulchral effigy from and I will write about it.

Some of my favorites of the Poland's XIII century:  Swietopelk II of Pomerania  Swantopolk II 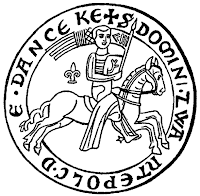 and Boleslaw Pobozny of Wielkopolska  Boleslaw the Pious

here in one of his seals, showing our prince  slaying a winged dragon or a serpent-like winged monster (perhaps  a monster of Swietopelk's Pomerania).
... and finally I am very proud to show my own  9 years old son's drawing of prince Henryk Probus, done two days ago (color pencils), based on the famous Manesse Codex miniature: 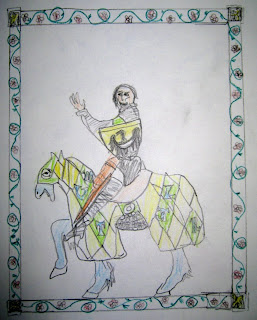 Gustavo,
thank you very much for your kind comments :)
I am about to start a separate blog my son, he is developing into a great artist and story teller - he likes to draw comix and also loves to draw historical images, eg from Polish history etc. He has done the whole album of portraits of our Kings from Mieszko I to Zygmunt August.