Durer- Adoration of the Magi (Uffizi)

Salvete Omnes,
so we are in the brand new AD 2020, back in the saddle to to speak.
so starting I would like to turn your attention to one of the Durer's most important works, namely, the  wooden panel from the Uffizi Museum (Florence, Italy) - titled Adoration of the Magi, commissioned by the Saxon prince and elector of the Holy Roman Empire Frederick the Wise.
Religious topic and masterful execution, as you can see in this image from the Wiki Commons 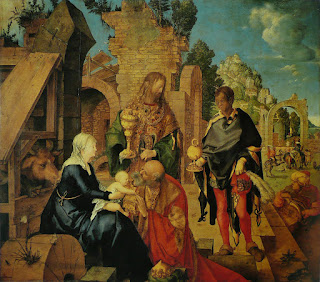 this beautiful painting has a bit of detail that may be of interest to us - maestro Durer took pains to paint a group of horsemen in front of and behind  the ruined arch. 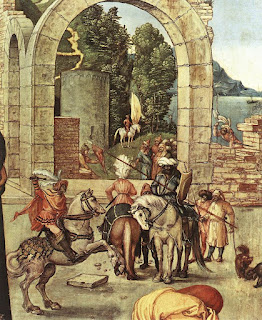 the German-late Gothic  horseman, although completed in AD 1504 the equipment, especially the high saddle with round skirts, has the look of the Gothic horse tack  - note the horse whip, double reins, curb-bit, wide cinch, cover over the rump. The breastplate, headstall and reins are of one uniform design. The muscular and very much a war horse is shown in collection and perhaps showing off its training and athletic ability. This grey stallion is shod and with a long tail, but no forelock. 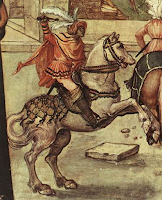 another German horseman his headgear covered with ostrich plumes

Stradiot or Albanian or perhaps even Turkish lancer with a Balkan? lance with a red pennon, and some sort of a Balkan? shield (painted a bit grotesque).
also a curb-bit with double reins, simple war bridle, and some sort of leather? barding covering the sides of this steed. 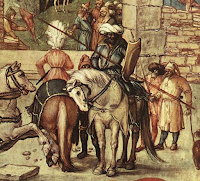 rider with a large banner from beyond the arch

Interestingly, the black Wise Man Saint Balthazar appears to have the so called Mercury wings with spurs? 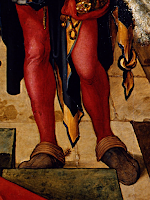