Salvete Omnes,
and here we go - December and ever so close to Christmas and winter time, perhaps with snow this time, as we seem to have local cooling and not warming..
ad rem, I would like to share with you several images of Jan Kazimierz Vasa, the third and last Vasa king on Polish throne during the Polish-Lithuanian Commonwealth.

He, among our XVII century kings,  is perhaps the most difficult to asses, as under his rule the Commonwealth almost disintegrated and them came together again loosing huge parts and vital areas, large number of population and wealth in process, his armies lost and then won amazing victories, and he allowed for Ducal Prussia to become the separate state and led the nation into the civil war (the tragic Lubomirski's 'rokosz') in order to fulfill his (an his French wife's) absolutists designs and plans.
His reign ended in a complete disgrace, broken and with many problems he abdicated the throne (went to live his life at Louis XIV's France), without bringing the peace among his subjects and citizenry as the fumes of discontent, division and anarchy smoldering and weakening the country.
He abdicated even though the war with the Ottoman Empire and their allies was commencing (the famous reversal of alliances, the Zaporozhian Cossacks and Tatars again being allies in their war against the Commonwealth) and would continue until the end of the century.
Jan Kazimierz Vasa upon leaving Poland illegally took with him to France certain royal jewels and symbols (some were destroyed by the French revolutionaries during the 1790s)- I wrote about them in context of the Notre Dame Cathedral fire. Perhaps it is time France returned this treasures to Poland. It is our heirloom and national treasure.

But he did have several grand moments - one of them was the great victory against the rebellious Zaporozhian Cossacks and their Crimean Tatar allies at Beresteczko (today Berestechko,, Ukraine)- probably the largest land battle of the XVII century in Europe.
In 1656 during the holy mass at the Lwów (Lviv) Cathedral Jan Kazmierz II crowned Blessed Virgin Mary as the Queen of Poland, and the official titulature became as follows - The Most Holy Virgin Mary, Queen of Poland. And we have been venerating Her and blessed with Her protection ever since, the most holy site for our Queen has been the Holy Black Madonna of Jasna Gora  abbey in Czestochowa.

there is this bronze plaque (a detail below) commemorating the Beresteczko victory, located in Franch church  where the Jan Kazimierz's heart was buried upon his death (he died in France, but his body was returned and then ceremoniously  interned at the Wawel Cathedral in Krakow, where it remains today). He was known for many lovers but had no official surviving heir as his children died in infancy. 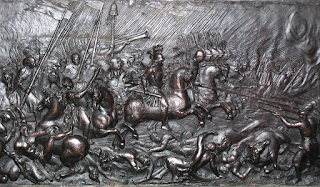 and there are many portraits of our king in armor, and I wonder if this was the type of armor used by the winged hussars of the period? 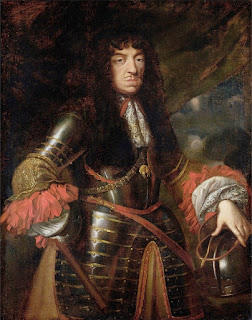 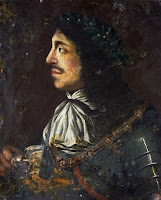 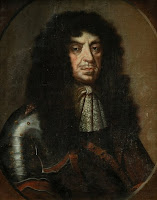 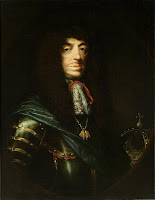 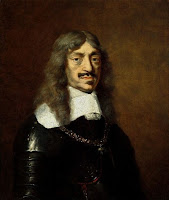 ..
there is also famous chain-mail armor and portraits in that armor showing our king, but these will be subject of another post.
***
When German Kingdom of Prusia army occupied Krakow and Wawel Royal Castle complex (upon the defeat of the Kosciuszko Insurrection forces in the south  in  June of 1794), and in October of 1795 under the most secret command of their king they broke in and took the royal treasure (Thesaurus Regni) stored at the Wavel, that contained the rich, splendorous and millennial treasures of Polish Kingdom, and took it to Berlin.
The Crowns and regalia that were used by the Primate of Poland to crown Jan Kazimierz II as our king were taken illegally and in contradiction to moral and ethical principles of the time by the House of Hohenzollern, and their king Frederick Wilhelm III had them taken apart and melted (most likely in 18109-11) to finance their war effort against Napoleon in 1813 (they also got plenty of money from United Kingdom). The official heir to the Polish throne and Polish king since 1815, tzar Alexander of Russia and his brother Nicolas (since 1826) demanded these regalia back from Prussian Kingdom's rulers, not knowing that these treasures were illegally destroyed.

maps how the Commonwealth shrunk under his rule, especially the geopolitically strategic and vital region of Smolensk
Ad 1648 - 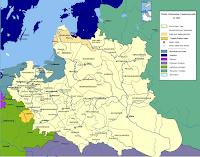 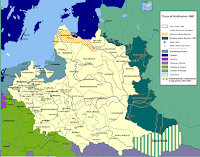