Salvate Omnes,
perusing the Wiki Commons I came across this very interesting artefact from the Oriental Institute Museum, University of Chicago, Chicago, Illinois, USA.
It comes from the Qustul site in southern Egypt and is dated to the last quarter of the IV century AD. This was the frontier of the Roman Aegyptus and Meroe/Kush//Nobadia of the Nile Valley. 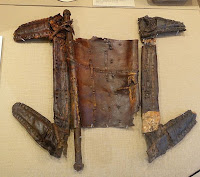 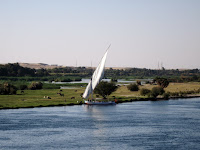 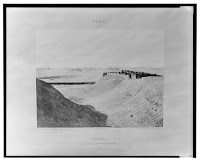 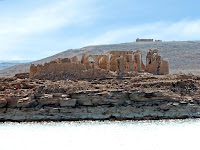 The ancient Egyptian sanctuary of Isis and Roman stronghold of the island of Philae, situated within the rapids of the Nile known as the 1st Cataract (also the other famous fortresses of Elefantina and Talmis), on the Roman southern frontier and where traditional ancient Egypt frontier was set between Egypt and Nubia, where the early I century Ad Roman fortress at Primis (Qasr Ibrim) lay within the land of  Dodekaschoenos  that traditionally was the buffer zone between the Ptolemaic Egypt, later  Roman Aegypt and Meroe/Nubia/Nobadia and raided by the Blemmye( the Eastern desert nomads and skilled raiders - ancient Arab desert dwellers - riding as far north as the famous Wadi Hammamat spice and silk trade and gold mining route between the Nile and the Red Sea ports). South of the Roman frontier on the Nile sat Faras (ancient Pachoras) that was the capital of the ancient Kingdom of Meroe (famous for the war  its queen Amanirenas waged against the Augustus praefect of Egypt Gaius Petronius), and after 350AD was the capital of the Christian kingdom of Nobadia/Noubadia, and later of the medieval Christian Makuria( it was a Christian state  until it had fallen victim to the Islamic conquest in the XIV century AD).
The area was the subject of military expeditions during the later Empire, including one by Diocletian. During the later Roman rule in Egypt the region became Christian and resisted Saracen invasions for many centuries to come.
Presently Faras is under the water of the Aswan Dam and it was many archaeologist teams from Europe and the US who helped to save many of the objects from the water-induced destruction. Polish archaeologist under prof. Michalowski   helped to save some of the amazing artefacts from Faras - today some of the frescoes and other treasures from the Faras Cathedral can be seen at the Warsaw National Museum special Faras section. I had the pleasure to walk these galleries with the distinguished  members of the Siedlce conference in 2016.
Valete
Posted by Dario T. W. at Wednesday, May 01, 2019

Amazing post with lots of informative and useful and amazing content. Well written and done!! Thanks for sharing keep posting.
clipping path service

thank you for visiting, reading and commenting - much appreciated!
- again, many thanks - :)