Salvete Omnes,
Spring is in full swing, so off to some green pastures we go -
for example let us visit this canvass by Jacob van Loo, 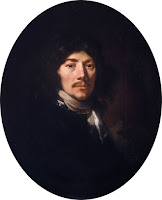 This Golden Age Dutch master, and father of many children (and the patriarch of painters' dynasty of painters), while drinking at the tavern had gotten into altercation with one Hendrik Breda whom  he had stabbed  so successfully that the victim died.
Below one of his paintings showing a bucolic scene at a tavern or inn. All men carried weapons, swords and daggers, so any serious altercations could have turned into violent brawls with wounded etc. 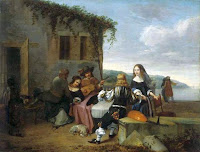 Master Jacob, being in danger of getting his justice at the gallows in return for his felonious deed,  had to hastily abscond from the Dutch Republic's justice and quit the realm.  Fleeing in this  rather inglorious manner, being condemned to death in absentia and banishment, he successfully changed his family's residence from Amsterdam of Netherlands to Paris, the capital of then still very slowly rising sun of king Louis Bourbon or Louis XIV Kingdom of France. In Paris he became a popular painter and in 1663 AD the member of the Royal Academy.
ad rem, the horse in  question, with his owner's family ( circa AD 1640 - the Meebeeck Cruywagen family portrait with a black horse in front of their country home,  apparently family portraits were popular in the XVII century Netherlands - eg a series of articles on the subejct ) : 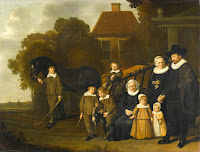 and the black horse 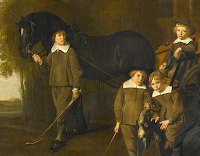 his head with bridle 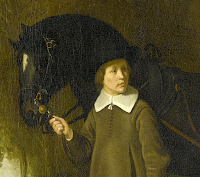 the bridle has some unusual strap arrangement. Namely the cheekpiece has  one large shiny buckle low immediately next to the curb-bit and then another one above the browband, on the crownpiece, and the second buckle for the throatlatch.  Note that it is not clear if this bridle has a browband at all.