Salvete Omnes,
today a little Americana - via a linked article
I came across this very interesting article on the very rare American saddle called the  federal ranger saddle or simply put a Spanish American saddle that was order by the federal government for the US cavalry, then  made, fitted with extras for cavalry use as M1859 McClellan saddle pattern and used during the American Civil War.

And in order to stay in the spirit of the times let me bring to your attention some art by the eyewitness to the great American war maestro Edwin Forbes - here are his studies of the  great army. 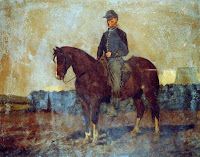