Salvete Omnes,
Spring is around us, and where is the global warming or climate change? It has been cold and cold.
anyway, to warm up the historical equestrianism a bit - maestro Lorenzo Veneziano and the horses and  horsemen in his art :
first this little picture, the triptych from 1370sAD - Museo Tyssen-Bornemisza in Madrid, Spain -on the right side of the triptych there is a horseman with his grey steed, but owing to the small size of the picture I cannot see much there

the second image, a predella, from the Staatliche Museum in Berlin shows  Conversion of Saint Paul, is more populated, with 7 horses and riders, and due to the proper size for more investigative approach  appears quite rich in detail.

the center figure - of Saint Paul the Apostle - the knight soon to become saint Paul carries a great sword, and a combination of cuir-bouilli (hardened leather) armor that for the last quarter of the XIV c. appear to have been purposefully antiquated as already the Italian armor industries were the most advanced in Christian Europe.

the red leather saddle is interesting,as with its low pommel and cantle appears to portray a riding knightly saddle (note the saddle skirts and cinch - it is a leather one?), but the gray  horse (shod with horse shoes), with its tied tail and short mane and tied up forelock, perhaps is supposed to represent  a dextrarius and not a palfrey. Horse tack is rich in beautiful vermillion red, the bridle has a curb-bit with a single set of reins.
the figures on the left
we see two figures on the left, one sorrel horse with a long- shanked curb-bit hanging from its bridle and dark blue tack,  behind him(presumably the armed men rode male horses) a gray horse with red tack - both horses appear collected.

the horses on  the right - the brown horse with another set of rich red horse tack, also a curb-bit and studded crouper and breastplate. The saddle with long skirts appears to have been portrayed with larger pommel and cantle than that of Saint Paul. There are three more horses, seen in less detail - gray, bay, and dark brown, 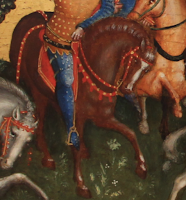 So in this little predella we get a glimpse of the rich equestrian  life of the northern, Venetian?,  Italian nobility.
Valete
Posted by Dario T. W. at Tuesday, May 21, 2019