Salvete Omnes,
a 'little' entry  on the fine saddles from Down Under and 1840s Australian colony.
many years ago I used to to own two different Australian saddles, one with a horn and one without. (photos for reference only, they do not represent my old saddles) 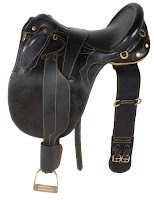 So perusing the net I went into the Wiki Commons collections and found some historic photos of the Australian stock saddle and some more current versions. 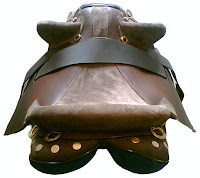 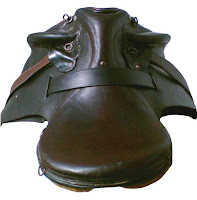 I liked riding in these saddles, they were great and comfortable for the horse and I, just eventually I went into riding in the Western and McClellans saddles and sold off my Australians. 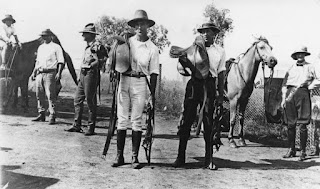 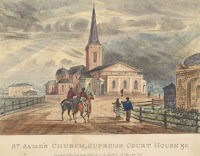 Looking back into the Australian colonial past in January 1849Ad issue of Sidney's Emigrant Journal advised a gentleman for the voyage in Australian bush:
[..]2 pairs of moleskin trousers, strapped inside all the way down, 4 pairs of moleskin trousers, 12 Florentine shirts, 6 pairs of boots, strong Wellingtons or ankle-jacks, 1 monkey jacket, 2 shooting coats, 1 drab coat (loose made), a pari or two of the best spurs (plated), 12 coarse silk pocket handkerchiefs, a good head-stall snuffle bridle - the saddle had better be brought in the colony, also saddle-bag.
A light (7 lbs) double barrelled gun, made strong in the stock, with swivels for sling, a rifle, double-barrelled pistols, an holsters, powder and shot - these things had better be packed in a case lined with tin or zinc.[...]
Ladies' outfits must be on the same scale as gentlemen's (page 111).

So it was perhaps that good riding saddles were not yet made in the colony, or British gentlefolks preferred their own well made London saddles.
Speaking about the ladies and working women in 1840s Australia around Sidney  - the same Journal printed sort of advice:
Labourers wives ride in drays, unless their husbands can afford a horse[...]Gentlemen going beyond Bathurst, to which there is a coach, generally drive their wives in tandems. You can tandem through the bush. The country is generally dry, so the roads are not wanted;  but a bushman's wife should be a good horsewoman, and be able to travel  all over the colony with a side-saddle and saddle-bags. [...]

Where there are roads in the settled districts, horse teams are in favor, but two-wheeled drays are more handy to drag down and up gullies than four wheels. [..] A fine lady would be very useful but a farmer;s daughter, accustomed to ride Dobbin to market, would be a great comfort too. 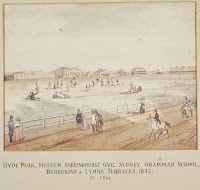 a word or two about the 1840s horses, - from one called The Bushman or the settler or squatter in the colony made a long trip and wrote about it (SEJ, p123)-

''The horse ridden on this occasion was a thorough-bred of the Whisker blood. Thorough-breds are found the best for Australian work, except for stockmen's use in riding after cattle—they require a small cobby nag that will turn on a cabbage leaf, and generally the ugliest horses in a herd are cast aside for their use. There is a good deal of Arab blood in the colony, and the cross makes fine hacks, with good temper; but English blood stallions are the safest to breed om to secure saleable colts.'' 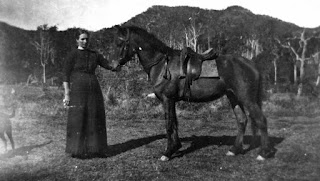 the XIX century Australian horses and stockmen topic etc  to be continued
Valete
Posted by Dario T. W. at Thursday, May 30, 2019